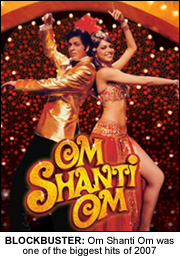 As Farah Khan’s ‘Om Shanti Om’ releases on DVD, complete with a 16-page booklet that gives an insight into the cast and crew of the movie, I caught up with one of the stars of the film: Simon Hewitt. Simon who? Shah Rukh Khan’s bodyguard. That’s who.
Movie buffs will recall Simon as the foreign bodyguard who appeared constantly by the side of Shah Rukh’s Om Kapoor character in the blockbuster. Clad in a black suit, with ever present dark glasses, the 6′ 3″ Australian born actor cuts an imposing figure on celluloid. At the scheduled interview location, a Mahim coffee shop, on the edge of Bombay’s filmi society; the patrons excited whispers of Om Shanti Om rebounds as Hewitt enters.
So how does a thirty something Australian end up in the biggest Bollywood film of all time? “I got the part through an audition” Simon narrates, “In fact I got a couple of films for SRK’s production house Red Chillies in that one audition; the other being ‘My Name is Anthony Gonsalves’ “.
Hewitt, who swapped Melbourne for Mumbai 4 years ago, states, “I knew it was a big film. The hype was huge before we had even finished it. But who could have foreseen the circus that was to come following the release”. Looking back on the experience, Simon reflects, “I shot for 25 days over about 4 months. I had no idea what the film was about while I was shooting. In fact it seemed a bit silly, but of course at that stage I didn’t know that it was deliberately tongue in cheek”.
But of the superstar himself, Simon says, “Shah Rukh seemed like a nice guy. A good mix of being both intelligent and practical. In one of the shots he fixed my sunglasses when they kept falling off my face”. Along with many other fans of Khan, Simon shares the view that the star is approachable. “I felt him to be busy but not stressed”. Hailing from a foreign background Hewitt accepts, “I didn’t have the same awe of Shah Rukh as the other members of the film and would often sit next to him to watch the monitors”.
“Farah, on the other hand, used to stress me out with her microphone”. The actor remembers a time when he was suddenly needed at the last minute to shoot on the ‘Deewangi Deewangi’ sequence. For those of you who came in late, the song that was picturised on 31 of the industry’s hottest stars. However, Simon was out of town and could not be contacted. Fortunately, Farah was forgiving when she found out that Simon’s date problems were the result of an outdoor shoot in Bangalore with none other than Aamir Khan.
It is not everyday that an actor gets to shoot every single one of his scenes with screen idol Shah Rukh. And that with no dialogue. “25 days shooting and not a word spoken that’s got to be some kind of film record” joked Simon. “Actually, the script said I was to say one word. I remember when it was time to shoot that section, Shah Rukh laughing and saying live it up, knowing it was the only word I would get to say”. And Simon’s last word on SRK? “The guy is pretty mellow”.
Steven Baker is a UK writer who divides his time between London, Delhi, and Mumbai. Best known for his writing on the Hindi film industry, his work regularly appears in a range of Indian, NRI, and international publications. Steven Baker is presently the Co-ordinator of the British Council’s Creative Writing course in New Delhi. He has also appeared in 15 Bollywood films.