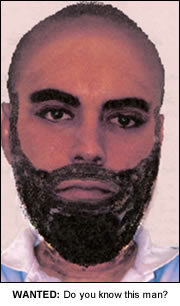 DETECTIVES have released an e-fit of a taxi driver wanted in connection with an indecent assault on a young woman in Leicester.
The victim, who police said was left “extremely shocked” by the incident, was assaulted in the early hours of 18 November as she returned home from a night out.
Sometime between 3am and 4am on Saturday November 18 the victim and a male friend got into a taxi from Humberstone Gate, Leicester.
The victim’s friend was dropped off in Wigston and the victim remained in the taxi to continue her journey home.
The taxi driver stopped in Hospital Lane, Blaby and got into the back of the cab with the victim where he indecently assaulted her.
The victim struggled with the offender and he then pulled her from the cab and left her on the ground in Hospital Lane.
The offender was driving a dark Ford Escort or Vauxhall Cavalier style car and was Asian, aged between 30-35, 5’8″-5’9″ tall, of medium build, with a full groomed beard and short straight hair.
PC Xanthe Fisher of Blaby local policing unit is investigating the incident, she said:  “Although the victim was not physically hurt she has been left extremely shocked and distressed by the incident.  We have been carrying out extensive enquiries since the incident was reported to us and have been liaising with Leicester City Council taxi licensing department to identify the person responsible.
“We would now like to appeal to the public to help us to identify the person in the E-fit, do you recognise the picture or description?  Any information no matter how small could assist us with our enquiries.”
Anyone with any information about the incident or the offender is asked to contact PC 4160 Fisher at Blaby local policing unit on Leicester (0116) 222 2222.