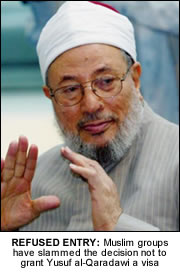 PRIME Minister Gordon Brown has evoked the fury of a number of Muslim groups after he banned a Muslim preacher from entering Britain.
Yusuf al-Qaradawi, 81, had been hoping to come to London to receive medical treatment but it is understood that the Prime Minister has blocked his visa.
The Middle East preacher, who has also been banned by American authorities, was called “dangerous and divisive” by Tory leader David Cameron last week.
Mr Cameron also called on the government not to allow him to enter the UK – advice taken up by Gordon Brown much to the dismay of Muslim groups.
The Muslim Council of Britain accused to government of caving into the “pro-Zionist and neo-conservative lobby”.
Dr Muhammad Abdul Bari, Secretary-General of the MCB said: “Yusuf Al Qaradawi enjoys unparalleled respect and influence throughout the Muslim world. I am afraid this decision will send the wrong message to Muslims everywhere about the state of British society and culture.
Mohammed Shafiq from the Ramadhan Foundation, a Muslim youth organisation, said the ruling pandered to xenophobia.
“We’ve had figures like Nick Griffin and the BNP operating freely and promoting violence towards ethnic minorities, and nothing is done.
“This smacks of double standards, and will isolate Muslim communities further.”
The British Muslim Initiative (BMI) called the decision to bar al-Qaradawi “an unwarranted insult to British Muslims”.
The Home Office confirmed that it had refused al-Qaradawi a visa after taking advice from numerous Government departments.
“The UK will not tolerate the presence of those who seek to justify any act of terrorist violence or express views that could foster inter-community violence,” a spokeswoman said.
Al-Qaradawi visited in 2004 and five times before that under the Conservatives between 1995-1997.