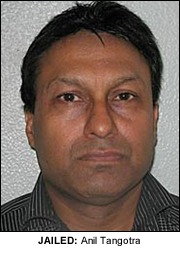 A DOCTOR who used an online Asian marriage bureau to find virgins to drug and rape has been jailed for 11 years.
Father-of-two Anil Tangotra was described as a “sexual predator” who portrayed himself as an eligible bachelor on the online Asian marriage website Shaadi.com to snare his victims.
A jury at Snaresbrook Crown Court convicted him of raping and attempting to rape the first victim in April 2006.
He was also found guilty of sexual assault and attempted rape of the second woman in May 2007.
53-year-old Tangotra denied the charges saying any sexual contact was instigated by his two victims.
The court heard that following the first attack in 2006 the GP was tried by another jury who acquitted him of one charge of rape and could not reach any verdict on other offences.
He attacked the second victim while he was on bail awaiting retrial for the first case.
The court was told Tangotra registered false profiles on the online website.
In April 2006 he posed as ‘Ravi Sharma’ and met his first victim – a 32-year-old Indian student from Newcastle-upon-Tyne.
He took her on a sightseeing tour of London then treated her to a meal before taking her to his home in Ilford, Essex, in his black Mercedes.

Tangotra spiked her orange juice with alcohol before brutally raping her.
Giving evidence the victim said: “I was crying… screaming. I was devastated. I was absolutely ruined.
“I was treated like a call-girl… and left like a zombie.”
More than a year later he arranged a date with a 30-year-old adult education teacher after claiming to be a JP Morgan investment banker called ‘Ashok’.

Tangotra spiked her orange juice with the sedative Zolpidem and then sexually assaulted her.

The 30-year-old, wept as she told how she slipped in and out of consciousness at Tangotra’s home in Ilford.

Sentencing Tangotra, Judge William Kennedy told him: “You were engaged in caring for the public in general practice.
“You were also a sexual predator determined to have sexual intercourse with young Indian women by whatever seduction, trickery or force became necessary.
“Had the jury not been sure of your guilt upon the evidence, the reputation of each woman within her community would have been utterly and irrevocably destroyed.”