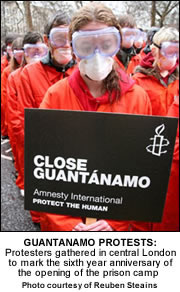 WORLDWIDE protests calling for the closure of the American prison camp at Guantanamo Bay have been staged today.
Thousands of people are believed to have staged demonstrations in cities across the world to mark the sixth anniversary of the prison camp.
In London over 200 people protested outside the US embassy in Grosvenor Square wearing Guantánamo-style orange boiler suits as part of Amnesty International demonstrations.
The London Amnesty protestors had braved heavy rain to stage an all-night vigil in a replica Guantánamo cell ahead of today’s demonstration.
Similar protests were held in Edinburgh and Belfast, as well as Washington, Tokyo, Manila, Sydney and Stockholm.

Amnesty International have created a list of recommendations to end illegal detentions which is says will not compromise the US government’s ability to combat terrorism.
Recommendations included an end to secret detention and for any detainees to be charged and tried in independent and impartial courts if they are not to be released.
Amnesty International’s Secretary General Irene Khan said: “The illegal practices adopted by the US government in its ‘war on terror’ – exemplified by Guantánamo and the CIA programme of secret detention – have promoted the dangerous notion that fundamental human rights can be set aside in the name of national security.

“Arbitrary and secret detentions breed resentment and threaten rather than promote security.”
Meanwhile at 10 Downing Street former Guantanamo detainees, including Moazzam Begg from Birmingham, delivered a letter calling for the closure of the base and the release of British residents Binyam Mohammed Al Habashi and Ahmed Bel Bacha.
The letter, addressed to Prime Minister Gordon Brown, has been signed by a number of dignitaries including Baroness Helena Kennedy, Baroness Sarah Ludford, Lord Nazir Ahmed, Sir Geoffrey Bindman and many others, ranging across all parts of British society.
Mr Begg was detained at Guantanamo Bay for three years before he was released in January 2005 without charge.
He said: “Entering its seventh year, the internment of hundreds of men in Guantanamo Bay – without charge or trial – continues to be amongst the most visibly repugnant and persistently embarrassing episodes of the US-led ‘War on Terror’.
“Last year, even former US Secretary of State, Colin Powell declared, ‘…if it were up to me I would close Guantanamo not tomorrow but this afternoon …’  The intervention by the present UK administration in securing the return of four British residents last year is most welcome. But a similar assertion to that of Mr. Powell’s by the British government is now highly overdue.”