Shaana Diya makes her mark in the film world 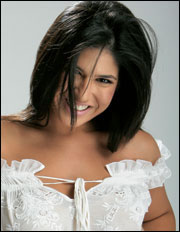 SHE first burst onto our screens in Namastey London earlier this year opposite Akshay Kumar and Katrina Kaif. Since then 23-year-old Kenyan born actress Shaana Diya has been making moves in the showbiz world. 2008 is going to be a big year for Shaana with the release of the Brit-Asian gangster-style film Cash and Curry and the Bollywood blockbuster ‘Bhoothnath’ where she teams up opposite Amitabh Bachchan, Shah Rukh Khan and Juhi Chawla. We caught up with Shaana for a quick chat…
You’re a newcomer on the film scene. How are you finding the experience?
It definitely is a roller coaster ride, with many twists and turns but I am enjoying every minute of it! It is important to learn by the mistakes you make and keep positive and ambitious about your career. I think as a newcomer it has been important for me to meet the right people in the industry and not wait for work to come to me but rather go after it with passion and also create my own work and opportunities.
Your first Bollywood film ‘Namastey London’ was a quite a scoop for a newcomer. How did you land the role?
I had just moved back to London after living in New York for 4years and was keeping myself busy in the Theatre scene, when my agent called asking me if I’d be interested in auditioning for an Indian movie. I had grown up on them and didn’t think twice about going to the audition. About a month later I got a phone call from the casting director informing me that the director had flown down for call backs and I needed to prepare for my second audition. The director, Vipul Shah, was impressed with my acting training and gave me 24hrs to learn the Hindi version of the audition!!! I stayed up all night memorizing the lines and the next day had my 3rd audition – I was absolutely petrified but a week later my hard work had paid off when I got a call from my agent informing me I had the part!
There were rumours that your co-star Katrina Kaif gave you quite a torrid time on set. Is there any truth to this?
I think this question will haunt me my entire career! Katrina is a beautiful and talented actress who I have nothing but the deepest respect for. She is doing extremely well at the moment and I wish her all the best. We had a very professional relationship, and even though we didn’t become best friends, I would not recall my time on set as being torrid!
Your next film Bhoothnath is out in January. You line up against quite an incredible cast.
I completely agree with that statement, it was an honour working with Amit-ji.
What was it like being on set with Amitabh Bachchan and Shah Rukh Khan?
I unfortunately did not directly work with Shah Rukh Khan but had the privilege of working closely with Amitabh Bachchan. He was an inspiration and I learnt a lot by watching his diligent work ethic and unwavering focus on set. I strived to give the perfect first take while sharing the stage with him and bettered myself because of him.
Tell us a bit about your character in Bhoothnath
Unfortunately at this point I cannot disclose too much information about my character in the film.
You go from an opinionated daughter-in-law in Bhoothnath to a ‘sari-clad assassin’ in Brit-flick Cash and Curry. That’s quite a character jump!
I enjoy taking on extremely diverse roles that explore various angles of my own self or even characteristics foreign to me that need extensive research. Part of the beauty of being an actor is getting to know yourself and expanding your understanding on human nature in general.
You spent your early childhood in Britain. What are your fondest memories of living in Surrey?
The space! Now that I am living in Bombay I can really appreciate the landscape and distances in the countryside.
Finally, you’ve had a great 2007! What have you got lined up for 2008?
I have a couple of interesting scripts I will be working on in 2008 which I am really looking forward to as well as the release of Bhootnath and Cash and Curry. I am also working on a novel, which draws upon my own experiences intermingled with fiction, which is extremely dear to my heart!
You can catch Shaana on the big screen early next year for the release of Bhootnath