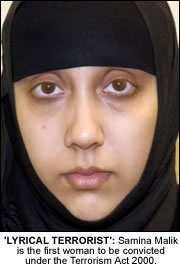 A FORMER Heathrow Airport worker who became the first female to be convicted under new terrorism legislation has been spared jail.
23-year-old Samina Malik was convicted at the Old Bailey last month after police found a “library” of material useful to terrorists at her family home in Southall, west London.
But she was spared a prison term by Judge Peter Beaumont who gave her a nine-month suspended jail sentence and 100 hours community service.
Jurors had heard that Malik, who worked airside at WH Smith at Heathrow, wrote on the back of a till receipt: “The desire within me increases every day to go for martyrdom.”
The lengthy ramblings about firing rocket launchers and “taking part in the blessed forgotten sacred death of Jihad” were found when police searched her home.
Jonathan Sharp, prosecuting, told the court Malik visited a website linked to jailed cleric Abu Hamza and stored material about weapons.
The court also heard she belonged to a social networking website called Hi-5, describing her interests as “helping the mujaheddin in any way I can”.
But Malik told the jury she only adopted her “lyrical terrorist” nickname because she thought it was “cool” and insisted: “I am not a terrorist.”