Khan gears up for birthday bout 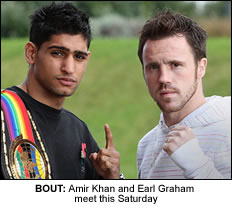 AMIR Khan has received an apology from Commonwealth title challenger Graham Earl after he accused the Bolton boxer of receiving more recognition than he deserved.
The two go head-to-head on Saturday in Bolton on the same day Khan turns 21. But there was little in the way of pleasantries as Earl questioned Khan’s route to success.
“Khan has become a thorn in my side,” said the Luton boxer.
“I’m number one in the division and have been for more than seven years.
“I have earned my way there through tough fights against tough opponents, not getting an easy way up.
“Granted he is an Olympic silver medallist. He has done what he has needed to do when he has been in the ring (as a professional) but the quality of opponents has not been up to scratch.”
“There is a bit of resentment because I have been to the top and I have not had any of the publicity (Khan has had).”
And in a final parting shot, Earl proclaimed: “You give them the money and the fame before they have earned it and the hunger goes.”
But the Luton boxer was forced into an embarrassing apology after retracting his statements.
“I let myself down,” said Earl. “You can’t dislike someone if you don’t know them. I don’t know Amir, so I don’t hate him. But I’ve been No1 lightweight in this country for a long time and he is trying to take that away.
“I don’t think he’s ready to step up to my level, but he says he’s going to show me he is. Maybe that’s why there’s been needle between us.”
Khan is hoping to extend his unbeaten run to 15 games when he meets Earl on Saturday.

New neoliberal government of want in queer male groups, nowhere much more than on this application, exemplify the hope that individuals will manage the...

A Day in the Life of…

Dad-of-three Jailed after pleading to Judge