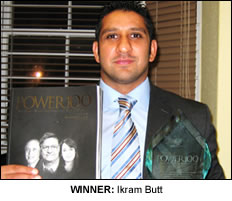 The 39-year-old, who played professional rugby league and represented England in the mid-nineties, was named as one of Britain’s most influential Asian men by collecting the ‘Future Leaders – Ones to Watch’ award at a recent Asian Power 100 ceremony in London

Ikram, a sport and leisure officer with Bradford Council, said: “It is a wonderful honour to have received this award at such a prestigious event and it would not have been possible without the tremendous support of many people. To feature in the Asian Power 100 publication is outstanding

“The role of BARA in encouraging young people to take up sport and bridging cultural and religious divides continues.

“We have a lot to do and a number of exciting initiatives in progress both in South Asia and within UK communities,” added Ikram.

Khalid Darr, Chairman of Carter Anderson & Chair of the Power 100 Panel, commented: ‘Judging by the applause from the guests Ikram’s award was a popular choice and thoroughly deserved for all is hard work and determination.”

BARA was praised recently by Prime Minister Gordon Brown during PM Question Time and has been officially endorsed for its work by Sports Minister Gerry Sutcliffe MP.

In Search of Leadership

Have They Made Up?

The Largest Dislikes Could Be the Secret to Finding Enjoy

Is, not all the these approved, you’ll get as taking out cash of mortgage