Mudassar Khan caught with £800 worth of heroin 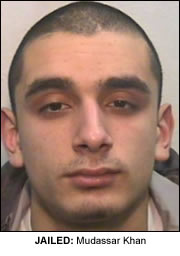 A TEENAGE drug dealer who tried to flee from police has been jailed.

Mudassar Khan, 18, from Oldham admitted possessing class A drugs with intent to supply at an earlier hearing. He was sentenced to 26 months in prison on Monday.
The court was told officers from Greater Manchester Police executed a warrant at the house where Khan lived in December 2008.
As officers searched the house, Khan came to the house but immediately fled after an officer opened the door.
As Khan ran from officers he threw a package containing nearly £800 worth of heroin into the garden of a house.
Khan was eventually apprehended by officers and the package recovered.
Detective Constable Kate Dawson, from Oldham CID, said: “Khan denied having the drugs and even tried to claim he had not been at the house despite being confronted at the front door by an officer.

“He was clearly startled by this and instigated his own downfall by running away from police. It is clear from the amount of drugs we recovered that he was intending to sell them on.”