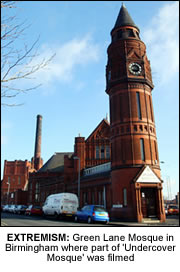 MEDIA watchdog Ofcom has accused West Midlands Police of giving “legitimacy to people preaching a message of hate” after it rejected its complaint over a Channel 4 Dispatches undercover programme about extremism in a Birmingham mosque.
The Dispatches programme ‘Undercover Mosque’, which was broadcast in January, took 10 months to complete and focussed on two Mosques in Birmingham – the Green Lane Mosque in Small Heath and the Jamia Mosque in Sparkbrook.
Visiting American cleric Abu Usamah was shown telling worshippers at the Green Lane mosque Jews and Christians were “enemies” of Islam and praising Osama Bin Laden.
When West Midlands Police launched an investigation in the aftermath of the programme many had expected the preachers to come under fire.
Instead West Midlands Police accused the broadcaster of “splicing together of extracts from longer speeches” which “completely distorted” what the speakers were saying.
The force was advised by the Crown Prosecution Service against taking criminal action against the broadcaster for what it said was an attempt to stir up racial hatred, and instead referred their complaints to Ofcom.
But today they were heavily criticised by the media watchdog who said their actions had been “perverse”, adding Channel 4 had “dealt with the subject matter responsibly and in context.”
A statement released by Ofcom said: “Undercover Mosque was a legitimate investigation, uncovering matters of important public interest.
“Ofcom found no evidence that the broadcaster had misled the audience or that the programme was likely to encourage or incite criminal activity.
“On the evidence, including untransmitted footage and scripts, Ofcom found that the broadcaster had accurately represented the material it had gathered and dealt with the subject matter responsibly and in context.”
Andy Duncan, Channel 4 chief executive, said: “This is an important judgment that vindicates our strong defence of the programme in the face of a concerted effort to discredit it.
“We have maintained all along that the comments made by certain speakers in the film spoke for themselves and this ruling confirms that.”