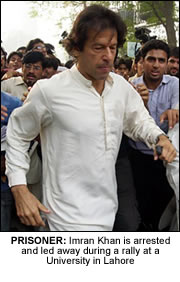 THE UNIVERSITY of Bradford has begun a campaign to free its Chancellor Imran Khan from imprisonment in Pakistan.
Former cricketer Khan is currently under house arrest in Pakistan after he was arrested and charged under anti-terrorism legislation after appearing at a rally at a University in Lahore.
He is one of hundreds of political prisoners arrested and detained in opposition to President Pervez Musharraf.
The University of Bradford’s Vice-Chancellor, Professor Mark Cleary, has written to the Prime Minister, Gordon Brown, to urge him to take action.
Professor Cleary said: “Imran is a responsible and lawful politician who has spent many years campaigning for justice and democracy in Pakistan. We simply cannot believe the charges that have been brought against him.
“Alongside his political and charitable work, Imran has also represented the University of Bradford in his role as Chancellor since his installation two years ago with exceptional enthusiasm and professionalism.
“If there are to be free and fair elections in Pakistan then leaders such as Imran and others who have recently been imprisoned under the emergency rule must be released.”
The University also launched an online petition for people to register their opposition to the incarceration of Imran Khan.
The petition can be found by visiting the University’s website at: www.bradford.ac.uk
The University’s former Chancellor, Baroness Betty Lockwood, is also writing a letter to the Prime Minister, urging him to act.
Mr Khan’s arrest sparked anti-government demonstrations in Pakistan yesterday.
Some reports have said three of his sisters and four cousins were arrested during one demonstration in Lahore yesterday.