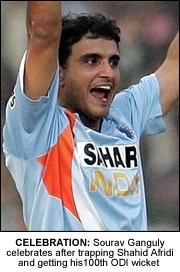 SACHIN Tendulkar helped guide India to their first one-day series win over Pakistan on home soil since 1983.
The ‘little master’ hit a stunning 97 in a 107 partnership with Virender Sehwag (43) to give India an unassailable 3-1 lead with one game to go.
India eventually reached their target of 256 with 21 balls remaining with Yuvraj Singh (53no) and captain Mahendra Dhoni (45no) hitting the final runs.
With Pakistan desperately needing a win to keep the series alive, captain Shoaib Malik promoted himself to the top of the innings looking to keep India’s bowlers in check.
But the innings could not have started any worse for Malik as he watched opener Salman Butt follow his 129 in Kanpur with a two-ball duck.
Younus Khan was lucky not to fall twice to Irfan Pathan as he notched up 78 with Malik (31) before the captain fell to Zaheer.
Younus and Mohammed Yousuf looked to consolidate Pakistan’s innings but when Younus (68) and big-hitter Shahid Afridi (1) fell cheaply the team looked in trouble.
It was left to Yousuf (99no) and Misbah-ul-Haq (40) to add some strength to their innings as Pakistan ended their 50 overs on 256.
In reply India lost two early wickets, Ganguly (5) and Gambhir (3) but Tendulkar took charge of the innings and set up a 107 partnership with Sehwag to put India on course for the win.
When Sehwag (43) was run out after a direct hit from Malik, and 10 balls later Tendulkar (97) bowled by Umar Gul, Pakistan perhaps saw a window of opportunity.
But they didn’t bank of the illuminating partnership of Yuvraj and Dhoni who refused to succumb to the pressure and led India to the win.
A disappointed Shoaib Malik said his team were frustrated by the series loss and would now look ahead to the three-match test series, while his Indian counterpart Dhoni hailed his team’s resilience for the series win.
The two teams will meet in Delhi on 22 November for the first of three Test matches.

City gears up for Boxing Bonanza

Sajid Set To Take On Biggest Test Yet For Syria Kids