Home Interviews ‘This is one of my best films to date’

Shahid Kapoor on JAB WE MET and Kareena 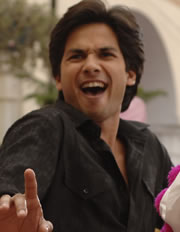 As the fallout of the Shahid-Kareena split does its rounds, Imtiaz Ali’s romantic comedy, Jab We Met, their  first romantic film together, is definitely B-town’s most talked about film.
Looking dapper togged up in a printed shirt and cargo pants; he is all smiles as he greets you. If Shahid Kapoor is in pain about his break-up, the actor is not showing it. Instead he is all charged up about the film, which is carrying splendid reports.
Don’t you think Jab We Met is a very unique title for a Hindi film?

Isn’t it cute? Actually it was my dad’s (noted character actor Pankaj Kapoor) idea to have a Hindi-English title so that both, the multiplex audiences and people in smaller towns could connect with the film. So together we both did some intense brainstorming, and he hit upon Jab We Met! There were two other options but Jab We Met won hands down by a public vote!
You have worked in three other films with Kareena Kapoor before this. This is your fourth one together. What expectations do you have from Jab We Met from?

Yes, we did Fida, 36 China Town and Chup Chup Ke, but all three were of a different genre with the focus being on other aspects than romance. I guess the audiences expected more of us together, which they will see for the first time in Jab We Met which is an out and out romantic film. I am very excited about the film and confident it will do wonders at the box-office! It’s one of my best films till date and one I’m immensely proud of!
Is it not ironical that your most romantic film is releasing at a time when so much is being said about your split with Kareena?

A lot has been written about Kareena and me on this issue which has caused distress to my family and to me. Frankly this is something I would not like to comment on.

Only the script and how the promos are presented affect a film’s ox-office. Nothing else matters.

Yup, we are two very contrasting characters in the film!  Kareena plays Geet, an amazing girl from Bhatinda, Punjab, who talks non-stop, the kind who can even make a conversation with a lamp post if given a chance! I play Aditya, an industrialist trying to cope up with broken affair. We are thrown into each other’s company when both of us miss a train and are left standing on a desolate railway platform!  Our journey from there as we try to make it to our destinations results in a unique relationship which goes much beyond love.

How adeptly according to you, has Imtiaz Ali presented this love story?

When Imtiaz approached me for the film we struck a chord instantly! I found we both shared similar views on how films should be made, in that there should be a balance between commercial and good cinema with ingredients from both the genres in good proportions. Imtiaz is a new-age director. I loved his Socha Na Tha and his racy style of filmmaking which is visible in Jab We Met also!  The other remarkable thing about Imtiaz is his ability to listen to people. He always lends a patient ear to every person’s opinion calmly, and then infuses any idea he likes in his project!

What according to you is the unique selling point of the film?

The fact that the love story which starts at a railway platform in Mumbai and meanders through various places to Bhatinda is actually shot in all these locations.  No make-believe sets or locales, everything is authentic! I still remember the magnificent haveli we shot in at Nabha (Near Bhatinda) and how we used to travel five hours to and fro every day! It’s a film that will appeal to every age group. That’s the beauty of doing a romantic comedy.

Yes, Pritam has given an outstanding track with some catchy and foot tapping remixes of songs like Mauja Hi Mauja and Tum Se Hi for different segments of the audiences. Personally, these two are my favourites. One is so lively, the other Tum a slow romantic! Both are picturised on Kareena and me.

Any scenes from the film which are memorable for you?

There is this pre-climax scene in the film between Kareena and me, which dwells on some eye-opening facts about life. It is very poignant and touching.

What else are you looking forward to?

There is Aziz Mirza’s Lucky Charms a musical romantic with Vidya Balan and Nagesh Kukunoor’s Tasveer, a thriller! Something interesting is also coming up with Raj Kumar Santoshi. But as of now it is only Jab We Met! (Laughs)