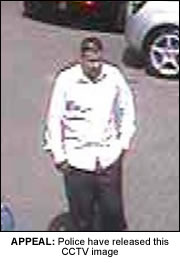 POLICE are hunting for a man behind the theft of a number of vehicles from car show rooms across the Midlands.
The man, believed to be Asian, has taken off with three vehicles after taking the cars out for a test drive.
On June 4 the offender made off with a Honda Civic from a garage in Coventry. Three further thefts – all Toyota Landcruiser’s – took place from Toyota car show rooms at Stourbridge on 3 August, Solihull on 11 August, and Coventry on 26 August.

The most recent incident occurred on Tuesday 11 September where the offender made off with a Land Rover from a garage in Solihull.


The man in the CCTV image is described as Asian, between 25 and 29 years old, medium to stocky build, around 5ft 10ins to 6ft tall, with a goatee beard, a gold tooth in front upper row and two gold earrings in his left ear.

Police are urging the man or anyone who knows him to come forward. Anyone with information should call Solihull police station on 0845 113 5000 or crimestoppers anonymously on 0800 555 111.