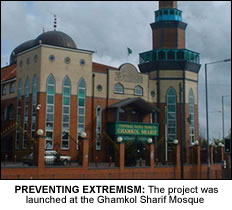 THE GOVERNMENT has given Birmingham council chiefs £525,000 to help combat Islamic extremism in the city.
The campaign was launched by Cohesion Minister Parmjit Dhanda who joined Councillor Alan Rudge, Birmingham City Council’s cabinet member for equalities and HR, at the Ghamkol Sharif Mosque in Golden Hillock Road, Small Heath yesterday.
The funding was awarded to the city by the Department for Communities and Local Government through the Preventing Violent Extremism Together Pathfinder Fund.
It will work on 11 projects based on Young People, Religious Institutions, and Women and Media.
Communities Minister Parmjit Dhanda said the government was “determined” to support the people of Birmingham who “are committed to preventing violent extremism”.
He added “Birmingham is clearly doing some excellent work – reaching out to young people and older people, men and women, leaders and followers. We are strengthening the things we share and value like democracy at every level and welcoming people from diverse origins who enrich our society.
“We are building bridges and equipping people with the knowledge and understanding they need to challenge and combat extremism. This is all about partnership, sharing common goals and finding solutions that meet real needs.
“The community has been proactive, imaginative and courageous in the way that it has engaged in this work. The local authority has listened to what people have to say and worked closely with its communities as well as key partners like the police.
“We can truly say that the way forward came from the community and is led by the community”.
Cllr Alan Rudge, Cabinet Member for Equalities and Human Resources, said: “By working closely with the people of Birmingham we have put together a package that will enhance the way our communities interact with each other, ensuring the future progress and successful integration of communities within our welcoming city.”
Amongst the projects established for the scheme in Birmingham is a programme to support the training and development of Imams in partnership with MINAB (Mosques and Imams National Advisory Board); another working with Islamic schools and madrassahs to promote community integration; and a series of media skills workshops to enable Muslims to communicate better with the wider community.