Rahul Bajaj: An inside view of Bollywood 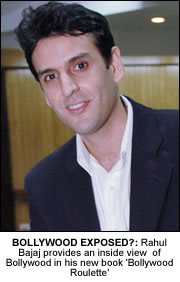 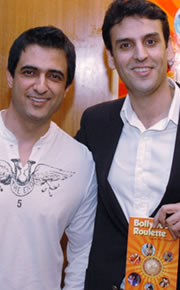 Your career path begins in a similar way to Shah Rukh Khan. Both from Delhi. Share the same acting teacher. Started out in television. How is it that one participant of ‘Bollywood Roulette’ trades acting for writing, to then publish a book on the industry; whilst the other seduces Indian Cinema to become ‘The King of Bollywood’?
In a gurukul sense, SRK and I are brothers we share the same guru, or theatrical father Barry John. Beyond that similar beginning I don‚t think I‚m even a patch on SRK! Sure I’ve done a few TV serials and I‚m from Delhi too, but I have no illusions that we‚re even in the same stadium of comparison! SRK is a superstar. I‚m still a kid who‚s trying to find his feet. I think he did what came naturally to him and I‚m doing what comes naturally to me. There has to be no one path. As Barry John would say, ‘be artists in the broad sense of the term.’ We both are.
You mentioned 26/7. Indeed, the climax of the story is set against the historical backdrop of the 26th July Mumbai floods. Were you personally affected by this event?
I was in Mumbai on 26/7. I was lucky; I got back home before the flooding got out of hand. But yes, I did have to wade through knee-deep waters and remember the two-day power blackout that followed and rationing my food and water in my flat. My most distinct memory of that day is that I remember reading in the papers the day before 26/7 how plans had been drawn up to transform Mumbai into Shanghai and after 26/7 thinking that Venice would have been a more appropriate model. Many of my friends were stranded away from home that night and had to spend the night in whatever shelter they could find. Psychologically, I think 26/7 was a very important event for everyone in Mumbai. Something snapped that day.
What next for the multi-talented Investment Banker/Actor/Writer that is Rahul Bajaj?
Right now I’m just basking in the warmth that ‘Bollywood Roulette: Inside the Struggle!’ is generating. I‚m very grateful to my readers for the love and affection with which they have received Bollywood Roulette. It gives me immense satisfaction when somebody tells me ‘after reading your book, I look at Bollywood and Bollywood products in a very different light. I wonder what those poor souls are actually going through.’ Knowing that people are getting a glimpse of the real Bollywood is very gratifying. Let‚s see what catches my  fancy next!
‘Bollywood Roulette: Inside the Struggle!’ (Indialog) by Rahul Bajaj
http://www.bollywoodroulette.com/


Steven Baker is a UK writer who divides his time between London, Delhi, and Mumbai. Best known for his writing on the Hindi film industry, his work regularly appears in a range of Indian, NRI, and international publications. Steven Baker is presently the Co-ordinator of the British Council’s Creative Writing course in New Delhi. He has also appeared in 15 Bollywood films.