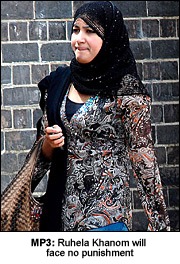 A MUSLIM juror who was caught listening to her MP3 player during a murder trial has escaped punishment.
The Attorney General said there was “insufficient evidence” to bring a case against 20-year-old Ruhela Khanom.
She had denied a charge of contempt of court following the incident in July.
Ms Khanom was discharged and later arrested when a fellow juror spotted MP3 headphone wires poking from the side of her hijab during the trial of Alan Wicks who was accused of murdering his wife.
But after careful consideration the Attorney General said they could not proceed with the case due to “insufficient evidence”.
A statement from the office of the Attorney General, Baroness Scotland, said she had “considered carefully the papers in this matter, in particular the witness statements, and has concluded that there is insufficient evidence to provide a realistic prospect of proving beyond reasonable doubt any alleged contempt of court”.
The incident came to light at the end of the trail after the judge lifted reporting restrictions on the incident.
It was revealed Ms Khanom had repeatedly tried to avoid jury service prior to the trial. During the trial she was also warned by Judge Roger Chapple after she appeared to be doodling on a pad while evidence was read out.
Prosecutor Peter Clarke QC had also requested she be discharged but his request was turned by the Judge Chapple.
She was spotted the next day listening to her MP3 player while defendant Alan Wicks was giving evidence.
Her case was referred to Judge Aidan Marron QC who said her actions did not “constitute contempt of court”.