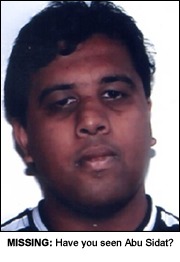 POLICE are growing increasingly concerned for a Walsall man who has not been since Sunday.
30-year-old Abu Sidat went missing from his address in Pinfold Street, Darlaston on Sunday.
Police said Mr Sidat has mental health issues and is not believed to have taken his medication with him.
They are now urging anyone who knows where Mr Sidat is, or may have seen him to contact police.
Mr Sidat is described as being of stocky build, 5ft 2ins tall, has brown eyes and short black hair.
He was last seen wearing a light blue and navy blue striped top, dark tracksuit bottoms and white and orange trainers.
Anyone with any information about Mr Sidat’s whereabouts is urged to contact Bloxwich police station on 0845 113 5000.