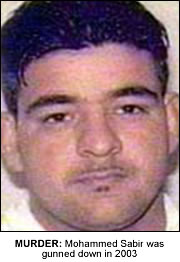 A MAN is to appear in court later today charged with the murder of a Birmingham man in 2003.
Twenty-two-year-old Mohammed Sabir was gunned down in the Lozells area of Birmingham on 14 April 2003.
The father-of-two died of multiple gunshot wounds after the attack which happened whilst he talked to three youths outside the Aziz Pizza and Kebab in Lozells Road, Lozells.
A 41-year-old man is due to appear at Birmingham Magistrates’ Court later charged with murder and possession of firearms.
A 23-year-old man is also due in court accused of possession of firearms.