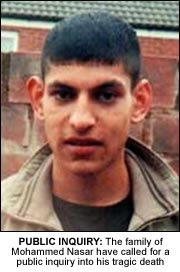 THE FAMILY and friends of a Birmingham teenager who drowned in a lake whilst trying to retrieve a ball have handed over a 5,000 name petition to city council bosses urging a public inquiry into his death.
19-year-old Mohammed Nasar drowned last month at the Brookvale Park, Erdington, Birmingham after trying to save a friend who got into difficulty in the lake.
His body was finally retrieved from the lake 16 hours later, prompting criticism from his family.
They have launched the Mohammed Nasar Memorial Campaign in memory of Mohammed who was training to be a plumber.
Protesting outside the Birmingham City Council, family and friends demanded a public inquiry into his death.
Campaign organiser Mohammed Masoom, told the Birmingham Mail: “We want answers as to why Mohammed died at a public park where eight people have died previously.
“We want to know why there were no visible signs showing the dangers of this killer lake. There are so many questions surrounding this death we believe there should be a public inquiry.
“The fact that it took 16 hours for a proper underwater rescue team to come and retrieve the body whilst Mohammed’s family helplessly waited is another question we want answered.”
A number of councillors and Yardley MP John Hemming also attended the protest.