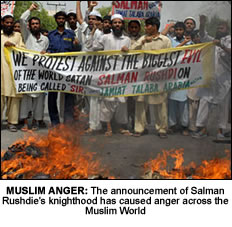 THE Muslim world has reacted with anger at the knighthood of controversial author Salman Rushdie.
Effigies of the author and the Queen were burned in Pakistan as protestors took to the streets to vent their anger.
More than 100 students gathered in the eastern Pakistani city of Multan holding aloft banners condemning the British author whilst chanting “Kill him, Kill him”.
The knighthood was announced on Saturday in an honours list for the official celebration of the queen’s 81st birthday.
But the announcement was immediately condemned by leaders in Iran who had issued a fatwa against the author in 1989 after the release of his highly controversial and for many blasphemous book ‘The Satanic Verses’.
On its release Rushdie was forced into hiding after Iran’s late spiritual leader Ayatollah Khomeini issued a fatwa calling for his assassination.
After Saturday’s announcement Iranian politicians accused Britain of insulting Islam.
“Honouring and commending an apostate and hated figure will definitely put the British officials [in a position] of confrontation with Islamic societies,” Mohammad Ali Hossein, spokesman for the Iranian foreign ministry said.
“This act shows that insulting Islamic sacred [values] is not accidental. It is planned, organised, guided and supported by some western countries.”
“Giving a badge to one of the most hated figures in Islamic society is … an obvious example of fighting against Islam by high-ranking British officials.”
In Pakistan today, the government passed a resolution demanding Britain withdraw the honour.
The resolution in the lower house of parliament on Monday was proposed by Minister for Parliamentary Affairs Sher Afgan Khan Niazi who branded Rushdie a “blasphemer.”
“The ‘sir’ title from Britain for blasphemer Salman Rushdie has hurt the sentiments of the Muslims across the world. Every religion should be respected”, she said.
“I demand the British government immediately withdraw the title as it is creating religious hatred,” Niazi told the National Assembly.
In Britain, the Muslim Council of Britain accused Prime Minister Tony Blair of issuing a final insult before he steps down as leader of the country later this week.
“Salman Rushdie earned notoriety amongst Muslims for the highly insulting and blasphemous manner in which he portrayed early Islamic figures,” Dr Bari was quoted by the Guardian newspaper.
“The granting of a knighthood to him can only do harm to the image of our country in the eyes of hundreds of millions of Muslims across the world. Many will interpret the knighthood as a final contemptuous parting gift from Tony Blair to the Muslim world.”