From Birmingham to the Bronx

Graffiti – art or crime? While the debate over graffiti as the contemporary man’s Picasso or Da Vinci rages, in Birmingham one man is laying his own claim to the suburban art craze. Mohammed Ali, a Muslim, a spiritual man, and a graffiti artist is writing his own history on the walls of the UK’s second city. It’s brought him critical acclaim because Mohammed is a ‘Muslim Graffiti Artist’ meaning his work draws on the spirituality of Islam. In a world where Muslims are viewed with suspicion Mohammed has no reservations about spray-painting the beauty of Islam across his both private and public murals.
Fresh from a recent tour to America, which was co-organised by Arts Council England, Mohammed offers us his views on life as a graffiti artist and how 9/11 and 7/7 affected his work… 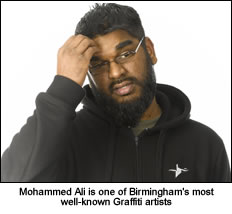 “The art which I make is something which takes the best from both worlds. My identity is a Muslim living, born and raised in the UK, the western world. My identity is a hybrid of being influenced by the urban street-art culture that is synonymous in the western world and my spirituality and moral values stemming from my belief in the religion of Islam. For me, both can sit comfortably with each other, without any contradiction, and in effect, countering the oft-heard “clash of civilizations”. My work attempts to expose this myth of the so-called clash. One may assume, even historically, that Islam has always been at odds with western ideals and values, but looking into the past, one will discover how this was far from the case. In fact the very fabric of modern society that exists today owes a lot to the religion of Islam and the Muslims. From the existence of hospitals, schools, medicine, mathematics and everyday things we take for granted, one can see how society today is built upon the very foundations set by early Muslims and the religion of Islam. So the work which I do, is just another example of how Islam, or something Islamic inspired, is once again part of the mainstream society once again that is to benefit all, shared learning and mutual respect and other positive virtues reflected in my artwork. 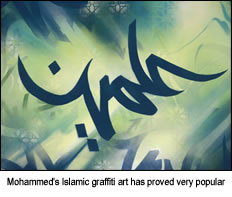 Being involved with Hip Hop and Graffiti –art from the early eighties, I was drawn to it by like many other youth. This accessible art form, was certainly more inspiring than the life of Van Gough that I had to endure at school.
The art was about pushing the boundaries of the written word, and developing the style and form of it, and often so much so that it became illegible, almost in abstract form. This is what I became drawn to. It was only in later years, at university, where I re-discovered my religion, whereby my outlook in life began to change. Where I started to ponder on the meaning of life, and where I was heading. I began to practice my religion more so, and from that point, Islam became a big part of my life. However I had creative juices flowing in my bloodstream, unfortunately for my parents – as being Asian, discouraging their kids from the “arts field” was part of being Asian! So the discovery of Islamic Calligraphy was truly inspiring, for me as an artist, and as a graffiti artist.
After exhibiting around the country and abroad, I realized the popularity of the work, and the impact it was having on communities all over the globe. I had emails coming in from people of all faith, who were inspired by the work I was doing. Even before 9/11, there was always some ignorance of Islam. It was always a widely misunderstood religion. I always remember an old lady who asked me “Halal meat, is that where you decorate the cow and pray towards it?”

When 9/11 and 7/7 happened, it simply reinforced the need for the work I was doing. It motivated me more so, to take my work further afield, despite the struggles we were facing, both here in the UK as well as places like Denmark and the USA. A lot of the time ignorance comes from people not having the access to certain knowledge, not being in contact with people to engage in discussion and dialogue. Now art can be part of the alternative means of dialogue. 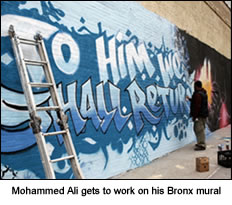 My recent USA tour was a huge success. The people welcomed the work I was doing, and a lot of interest was generated through widespread media attention across America. Mainstream media picked up on the murals and seminars I was doing across the USA and it was great to see that something positive was making it to the TV screens of the regular American people. Although I faced some negativity from Homeland Security everytime I travelled by plane, it encouraged me to strive harder. This was certainly a place that needed the work I was doing, in the face of this opposition. In Chicago, my progress was hampered by a group of bigots that made a complaint about the mural I was painting. They assumed the painting depicted the toppling twin towers, when in fact it was the Arabic letters of the word “peace” that they misinterpreted. In my view that was an excuse for their bigotry. The local councilor personally came and demanded I stop painting and mentioned that I didn’t have a permit to do this type of work. The story made big news in Chicago, how, a peace artist, was barred from completing a peace mural by the authorities. So I was unable to complete the Chicago mural, but it’s not a problem, because I have been asked to return this summer to complete that mural and make it bigger and better than ever before!”
For more information on Mohammed Ali and to view his work log onto www.aerosolarabic.com