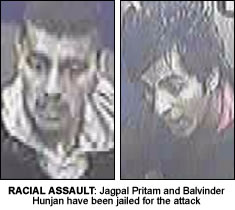 TWO MEN who racially abused and attacked a man on the Midland Metro tram service have been jailed for 18 months.
Jagpal Pritam, 22, from Wednesbury and Balvinder Hunjan, 20, from Smethwick launched into the unprovoked attack on their 47-year-old white victim on a Metro tram at Snow Hill station in August last year.
The brutal attack which left their victim with serious facial injuries was caught on the tram’s security camera.
Both men pleaded guilty to a charge of racially aggravated assault at Birmingham Crown Court.
The court heard the men launched into an unprovoked attack on the man, kicking and punching him as he lay on the floor. He was also called ‘white trash’ by his attackers.
A conductor who intervened was also abused. Eventually another passenger managed to break up the fight.
The victim’s blood was found 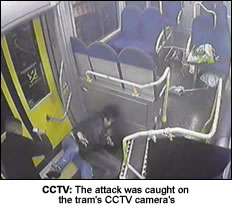 on the tram’s walls and floor, the court heard.
British Transport Police Chief Inspector Allan Gregory, Sector Commander for the West Midlands, said “This was a nasty unprovoked attack which left the victim suffering with serious multiple facial injuries.
“The CCTV footage provided by Centro has been a key piece of evidence within this investigation. The investment that Centro have made in technology and CCTV has been invaluable in bringing these offenders to justice.
“The sentence sends a clear message to people that BTP does not tolerate any form of violence on the railways, and those who do commit offences of this nature will be dealt with extremely seriously.”
Pritam, was jailed for 18 months in prison, half to be served on licence, and Hunjam was given 18 months in a young offenders institution.