Mehsopuria back on the Bhangra scene 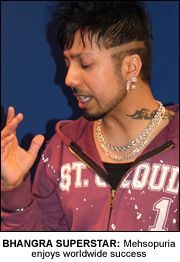 According to Mehsopuria he’s never been away despite taking over a year to release his highly-anticipated third album ‘Warrior’. With previous albums having taken the UK bhangra industry by storm there is huge anticipation for his latest offering. Here we speak to the international superstar about ‘Warrior’ and just why his Punjabi roots are so important to him…
Interview By Zakia Yousaf
You’re back on the music scene with your new album. Is it great to be back?
It’s good to be back Zakia with a new product in the market. Being back as an artist is good when you bring something new and not recycle your old sound, so in that sense it’s great to be back. Talking about being back, I haven’t really been away to be honest, just spent a long time on the album, making sure it was better than the debut and experimenting with different ideas to develop myself as a solo artist, which I think is evident in the product.
Tell me a bit about your new album ‘Warrior’.
‘Warrior’ is a 10 track album, which was recorded over almost 13/14 months. During the process of recording, I had written over 40 songs and recorded in total around 20+ tracks, of which 10 were selected. The sound of the album is fresh and different to my previous album, also the selection of songs is better. I’ve catered for my fans by delivering quite a few pure Bhangra tracks and the response from the fans has shown they love the album, which is what it’s all about, the buying public.
‘Mehsopuria – The Album’ was a great success for you. Was it difficult for you to come up with a selection of tracks for ‘Warrior’ which you thought would eclipse your previous albums?
For me it wasn’t difficult Zakia, as ‘Mehsopuria The Album’ was a debut and part of the learning process, I have matured as a singer, lyricist and become aware of what sort of songs my fans want, therefore it was more easier in the sense I was clear as to what they want and what I want to deliver, just needed to find the right balance in the album. The other thing with ‘Warrior’ was, I made a more conscious effort to send a message through at least one of the songs and that was song 6 Maapeh, which is about parents, I won’t go on too much about it, apart from saying to my fans, listen to it and if you don’t understand certain parts, have someone more fluent in Punjabi translate them for you. I’m sure the listeners will appreciate this track very much.
Warrior has a certain sound that could actually lift it out of the niche Bhangra market. Is appealing to a non-Asian audience something that goes through your mind when putting an album together?
I think your talking about the opening track ‘Patna’, that is more aimed towards non-Asians. To be frank, it’s about showing non-Asians how versatile and rich our ‘Punjabi’ language/music is. The track itself is Crunk (Hip-Hop) and we’ve added Bhangra elements to it, with Punjabi singing/rapping, thus creating a vibrant fusion of two popular genres of music, that fuse together so well. The idea is to bring non-Asians towards Bhangra music, a new appreciative audience, which we are achieving as some well known non-Asian presenters/artists/dj’s have liked the track a lot. Overall most of the album is aimed for the Bhangra fans.
How do you rate the current Bhangra scene in the UK?
I don’t really sit here judging the scene, whether it’s good or bad, I just do what I enjoy and deliver Bhangra tracks that I think my fans would enjoy. Assessing the scene is for others to do, I just feel blessed to be representing Punjabi music and honoured to write, compose and sing about our heritage, culture, language and the Punjabi way of life. I think the fans who actually buy, can asses the scene and pick and chose what they want to listen to.
You’re own history and roots are very important to you when it comes to music. Why is this?
I’m proud of being Punjabi and not being born in Punjab, has meant that I’ve had to find out more about our culture, country and language. The more I learnt as a kid, the more fondness I grew for Punjab and our mother tongue Punjabi. As a youngster I always felt I should hold on to our roots and history in my own way. The importance of Punjab’s history carries great importance, as that is where my ancestors are from and thus it’s a part of me too. 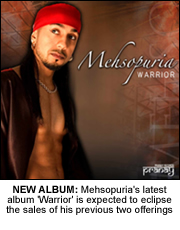 How difficult is it to try and come up with new sounds?
You know it’s probably difficult because so much new stuff has samples, which makes creating and developing a new sound more difficult. In terms of creating a new sound for percussion, that is difficult and as an artist you become more aware of it, as you record more and more percussion. In ‘Warrior’ I’ve tried different sounds, most have worked and I’ll continue to try different sound to see if I can develop my future tracks and not repeat the same sounds, creating your own sound and then developing the sound more takes time.
Finally, what are you passionate about other than music?
Working out and staying fit, martial arts, football and some other sports. My team Liverpool Football Club, have always been my passion as a kid and always will be. I enjoy watching Boxing, Snooker, Tennis, Athletics and UFC too. I use to enjoy painting, which I still do but don’t get time towards working on something creative as it requires patience and time.
‘Warrior’ is out now
Win a Signed Mehsopuria Album Catalogue!