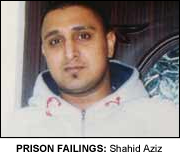 THE WIDOW of an Asian man killed by his prison cellmate has said she is still waiting for an apology from the prison service after an inquest ruled her husband was given inadequate protection from his killer.
Father-of-two Shahid Aziz was ferociously attacked by Peter McCann in Leeds jail just 30 minutes after they were put in the same cell in April 2004.
Mr Aziz suffered 13 different injuries in the attack including a gaping wound to his throat. He had also been strangled and repeatedly hit over the head with a chair.
McCann was sentenced to life in prison for the murder and gave evidence at the inquest where he said Leeds was a “racist jail”.
The jury sitting at Leeds Crown Court unanimously found that the prison failed to act on warnings that McCann was a threat to other inmates.
Shockingly a warning by a probation officer that McCann was a danger to other inmates was ignored.
In a statement after the verdict, Mr Aziz’s widow Parveen Khan said: “While the prison may not have had a direct hand in his murder, they were responsible for providing a safe environment for Shahid to serve his time and they failed.

“Although the Director General wrote us a letter of condolence at the time, neither he nor anyone else from the Prison Service have ever actually apologised in writing.

“The inquest gave the Prison Service the opportunity to put that right, yet none of the witnesses employed by the Prison Service, including the governor at the time of the murder, Ian Blakeman, gave us a clear apology in open court for the fact that Shahid was brutally killed in the prison. This silence has distressed us.”

The inquest heard that the jail was inadequately equipped to determine which incoming prisoners posed a serious threat. Of 13 flaws identified by the jury in the murder of Mr Aziz, one pointed to the fact that the jail had no access to the Police National Computer to enable staff to identify prisoners who posed a risk.
On 1 April 2004 a probation officer rang prison staff at the jail to warn that McCann was a danger to other inmates.
Details of his past violence were unknown to prison staff but they were made aware following that telephone call.
But a day later Mr Aziz was dead just half and hour after being placed in a cell with McCann.
The jury, in their narrative verdict, said: “If the information from the probation officer had been passed to the wing, Peter McCann would have been moved, a search would have been carried out [and it would have] enabled a thorough cell-sharing risk assessment to be carried out. These failings contributed to Shahid Aziz’s death”.
In another clear failing by staff at Leeds Prison, the inquest heard Mr Aziz had asked to see a race relations officer after allegations of racism at the prison.
In an interview with the prisons ombudsman a female race relations officer admitted dismissing Mr Aziz when he asked to speak to a race relations officer.
She told him: “You are looking at one. Go away, not interested”.
The prisons ombudsman said he was “appalled” by her actions.
The case mirrors that of the murder of Zahid Mubarek who was murdered by his racist cellmate at Feltham Young Offenders Institute in 2000.