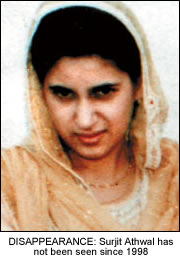 A MOTHER-IN-LAW called a family meeting to announce she was going to ‘get rid’ of her daughter-in-law, a court has heard.
Bachan Athwal, 70, denies the murder of her daughter-in-law Surjit Athwal who disappeared during a trip to India in 1998.
Surjits husband and elder son of Bachan, Sukhdave Athwal also denies murder.
Bachan’s other daughter-in-law, Sarbjit Athwal, told the Old Bailey she was present at a family meeting where her mother-in-law explained how she would take Surjit to India on the pretext of a family wedding.
The court was told Bachan was unhappy that Surjit was not getting on well with her husband and wanted her to “stay more within the culture”.
A month before Surjit flew out to India with Sukhdave and Bachan, a meeting was called where Bachan revealed details of the trip, the court heard.
Sarbjit Athwal, who was married to Sukhdave’s brother, told the Old Bailey her mother-in-law had made it clear she was going to ‘get rid’ of Surjit and that her husband was ignored when he objected to the plan.
“My mother-in-law said she wasn’t getting on and it was causing too much confusion and problems in the family and they were going to get rid of Surjit,” Sarbjit told the court. “There was a wedding going on and they were going to go to the wedding in India. They were going to take her to India and get rid of her.
“My husband was totally against it. He said that it shouldn’t be done.”
Sarbjit said she was “too scared” to speak up during the meeting and that accused husband Sukhdave “didn’t say anything” when his mother announced details of the trip.
She added Bachan had spoken to her brother in India who had told her to bring Surjit to India.
The trial continues