Home Interviews From Hollyoaks to the Hijab

How Andrew Mcnair coped with Islam in Halal Harry 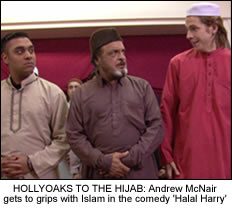 For a while Andrew McNair became a regular face on Channel 4’s Sunday morning Hollyoaks omnibus. Family dramas, a gorgeous girlfriend, a prison sentence, and a tragic death – you’d think he’d seen it all. Or so you thought. In his latest film ‘Halal Harry’, Andrew plays London barman Harry who decides he will stop at nothing in his quest to win the hand of the woman he loves – a woman whose parents are strict Muslims! Donning a Hijab and giving up bacon, ‘Halal Harry’ goes on a great Brit-Asian journey full of laughs and chuckles. Fresh from the films London premiere at the East End Film Festival last month, we catch up with Andrew to find out what attracted him to the project and how he felt having to wear the Hijab!
How did you get involved in the film?
I had just left Hollyoaks and was looking to try something totally different to what I had been used to and a friend of mine who was working on the project recommended me to Russell for a small part as Harry’s friend. However after a meeting in London with Russell we both had a similar view on how other characters in the film should evolve one of which was Harry. A week or so later I was offered the part of Harry.
Tell us a bit about your character Harry.
He’s not your typical “Alfa male” hero. Aisha brings out his confidence and that makes him grow both physically and mentally. At the start of the film Harry has a very stiff/rigid posture that gradually loosens until the final act where he has grown into his own skin and stands up for everything he has always known to be right and as with all good love stories, he get’s the girl!
Were you apprehensive at any time knowing the film took a light-hearted approach to Islam?
No, not at all. I was confident that this is the best way to look at any so called “sensitive issues”. Russell being a Muslim himself was never going to make a film for want of a better phrase that “Took the piss” out of Islam and peoples religious beliefs. We didn’t set out to make a controversial film, it is purely a comedy. Unfortunately there are bound to be certain people who read too much into certain parts of it but that’s life.
You wear the Hijab in one scene in the film. Is it something you can get used to?(!!!)
Ha ha well they are very slimming!!! Not really I actually found it very constricting and the lack of vision is something I wouldn’t like to put up with for very long. It was interesting though seeing people’s reactions when I was walking to set as a 6’2″ Muslim woman!
The film was at the East End Film Festival last month. It was also showcased at last years Bite the Mango Film Fest. How important are film festivals like the one’s mentioned in getting the film recognised on a wider scale?
Film festivals are very important for low budget films like this that don’t have big names attached to them. It gives us an opportunity to showcase the film to an audience of both our target audience and industry professionals/distributors we are trying to sell to by saying look here’s this film it’s shot and ready for an audience… Oh and by the way that’s your audience there laughing and enjoying every minute of it. 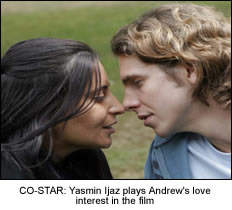 In an interview with us last year director Russell Razzaque said he was amazed at how much you fitted into the character of ‘Harry’‚ from the moment of your audition. Did you do any research into the character before your audition?
As I said before it was a strange audition because I read for the part of “Paul”, Harry’s best friend however Russell and I sat after the reading, had a really good conversation on Harry and the project in general and read through a few scenes and it just seemed to fit. There was no need to research the part it was all there in the script, it was just a matter of my interpretation matching Russell’s original idea.
You line up with a number of seasoned pro’s in the film. What was it like working with the likes of Kulvinder Ghir and Barber Ali?
Kulvinder is an absolute star, he is a top class actor and a pleasure to work with as you can see on screen during his scenes no matter who he is with he has a chemistry that draws the actor in as it does the audience. Barber is simply character personified as far as I was concerned some of the funniest bits of the film involve him… and me obviously!!!
Finally, what have you got lined up for the rest of the year?
With Halal Harry it’s a wait and see what the powers that be decide to do with it! In the meantime I am just the same as every other jobbing actor out there trying to audition as often as possible as successfully as possible. I wanted to really build up my CV after leaving Hollyoaks by doing good work with as many different characters as I can. That will hopefully continue!
For more information on Halal Harry log onto www.halalharry.com
Interview by Zakia Yousaf