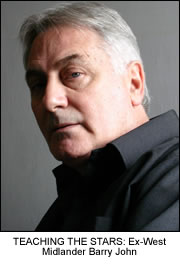 Celebrated acting teacher Barry John, has uprooted himself and his company from South Delhi to Andheri West; the heart of the Hindi film industry. Since his arrival from England in the late sixties, John has thrived on challenges, on pioneering into new territory, and encouraging others to join him on the journey. In launching his new venture, former Coventry native Barry John speaks to Steven Baker on his move to Mumbai, recent successful students, and his most famous ex-pupil Shah Rukh Khan.
Interview by Steven Baker

After 36 years in Delhi you are relocating to Mumbai. What prompted you to move?

Delhi has become a haven for corrupt politicians, bureaucrats, land and property speculators. Culturally, it is a virtual desert. Theatre activity has sunk to an all-time low; television offers few and uninspiring opportunities; and film is virtually non-existent. So, just as my students have little option but to migrate to Mumbai to improve their prospects, the same now applies to me.

Shah Rukh Khan has credited you with teaching him all he knows about acting. Do you agree?

On the basis of my own education and experience, I do not believe that any one teacher or mentor can be credited with delivering every skill or quality that an actor possesses. Acting is a complex alchemy of inner and outer experiences, awarenesses and skills that are drawn from many sources, and then filtered through the unique persona of the actor. And the learning never stops.

I imagine that I had a profound impact on SRK’s formative years as an actor, which are vital in laying positive foundations, fostering aptitude and self-confidence. His training was more of a traditional apprenticeship than a formal schooling, and he brought to it his trademark energy, hard work, intelligence and humour. The credit for the phenomenally successful development and management of his career goes to the superstar himself.

More recently, Kunal Kumar and Shiney Ahuja, amongst others, have passed through your doors. Did they have star potential from the beginning?

In the light of Shiney Ahuja’s and Kunal Kapoor’s more recent achievements, I might be tempted to say, in retrospect, that they had star potential that was evident during their training. But the fact is, I was not aware of it. Both were good students to work with: committed, involved, questioning and responsive. Shiney had a maturity of years and experience in business and in marriage, which set him apart from the average student; it resulted in greater self-belief and a deeper level of involvement. Kunal was from Mumbai, and therefore blessed with greater exposure and awareness of what was expected of him. 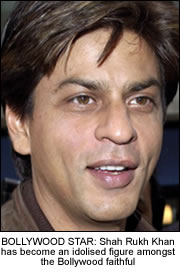 Private acting schools are not cheap. Is economic status a factor in the success of an actor in India?

Considering my own career options when I was leaving school in the early 1960’s, teachers told me I didn’t have hope in hell of being accepted into an acting school in London (viz, my working class roots, my ‘Midlands’ dialect, my ignorance of dramatic literature and the ways of the West End). So I decided to be a teacher of Drama instead. This question of the sociology and economics of actors and acting in India is a huge and complex one that is not easily answered. Traditionally, as in the West, acting is a low-status profession for all manner of vagabond and layabout with loose morals. But at the same time it has religious roots, as laid down in the Natya Shastra, and

performers who become popular are revered and worshipped as gods (and thus are able to make the transition to politics). The typical Indian actor, rural or urban, is poor; a bohemian who sacrifices material prosperity for the freedom, passion and transcendence gained through his art. If he attracts ‘royal’, private or state sponsorship, he is further blessed.

Film and television have distorted these traditional systems. They offer far greater financial rewards to actors, greater celebrity status, and greater demands that actors follow the dictates of commercial markets. It all comes down to what sells, and thus, far there has been little concern about whether an actor has been trained or not, especially if he is a relative of the producer or director. As with most things in India, film is a family business. Economic status is definitely a factor in the success of an actor, but the door is always open for exceptional talent also, and rags-to-riches stories are still a possibility.
What are your thoughts on the portrayal of goras in Hindi film?
The portrayal of westerners in Indian cinema varies between authentic and sublimely ridiculous. Traditionally the ‘goras’ are the villains and so have been licensed to be played fiendish, arrogant and dehumanised as any in a Victorian melodrama. As we become more distanced from the British/French/Portugese imperial history, the portrayals have become more considered, more believable, and even sympathetic. I have played colonial Brits who are typically stiff upper lips, callous and calculating. In Massey Sahib, my character was warm and friendly, torn between the ways of the natives and the rulers of British Government. The more recent films, Kisna and Rang De Basanti, have reasonably fair and truthful portrayal of westerners.

Will your new courses in Mumbai have a greater focus on film rather than stage?

Yes, the courses have been redesigned for Mumbai, and now accommodate modules on acting for the camera and experience of shooting a short film. Beyond the technical and aesthetic aspects, there are further modules on the launching and building of careers for actors.

Are you nervous about your move to Mumbai?

It’s a move to ‘The Big Apple’, with a lot at risk financially. There’s lots of competition, and I am the new boy on the block. Of course I’m nervous!

Steven Baker is a UK writer who divides his time between London, Delhi, and Mumbai. After graduating with a Bachelor of Arts in English, Steven completed a post graduate degree at the Institute of Education, University of London. He is best known for his writing on the Hindi Film Industry, with his work regularly appearing in a range of Indian, NRI, and international publications. Steven Baker is presently the Co-ordinator of the British Council’s Creative Writing course in New Delhi. He has also appeared in 15 Bollywood films.