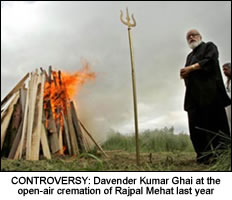 BRITAIN’S Hindu community may be able to conduct open-air cremations after a High Court judge backed a religious charity’s bid to challenge a local authority who refused to allow the traditional Hindu funeral.
Davender Kumar Ghai, a 68-year-old devout Hindu and president of the Anglo-Asian Friendship Society, challenged Newcastle Crown Court who ruled that an open-air cremation performed last year on the body of a 31-year-old Indian illegal immigrant was illegal, the Times reported.
Mr Ghai has presided over the open-air cremation of Rajpal Mehat who was found drowned in a London canal. Newcastle council had ruled that the ceremony was illegal under the Cremation Act 1902.
Police investigated the incident and passed a file to the Crown Prosecution Service (CPS). It ruled that an offence had been committed but that prosecution would not be in the public interest.
Since the case Mr Ghai, who wishes to be cremated on an open-air pyre when he dies, has challenged the validity of the authority’s decision.
And a breakthrough for the charity made news yesterday when a High Court judge approved Mr Ghai’s bid to seek a judicial review of the authority’s decision.
Mr Justice Collins ruled that it was in the public interest to allow the application because the issue was “of some considerable importance to the Hindu community”.
He also noted that rulings in 1884 and 1907 “may mean that the burning of dead bodies in the open air is not necessarily unlawful”.
If successful in his bid, Mr Ghai could pave the way for more than 560,000 British Hindu’s to opt for an open-air cremation.