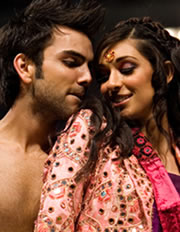 THOUSANDS converged in Birmingham to join in a week long spectacle celebrating Asian culture.
The Asian Lifestyle Show 2007 was hailed as one of the biggest celebrations of Asian culture outside of India before the bumper weekend and it certainly lived up to its pre-show billing.
Thousands of people across the country flocked to Britain’s second city to join in a weekend of fashion, beauty, music, food and entertainment.
Bollywood A-listers Fardeen Khan and Lara Dutta were also on hand to bring a touch of glamour to the event.
The duo met with fans and signed autographs on a special ‘Bollywood Stage’ sponsored by money-transfer giants Western Union.
The company, who have just launched a new £4.90 price plan to South Asia, have been regulars at a number of previous Asian shows and they treated visitors to this year’s event to a number of treats including a special interactive More than Money Bus which enabled audiences to make free phone calls to any country in South Asia.
Abda Hussain and Rifat Ali, who attended the event for the first time this year, said they were impressed by what the weekend offered.
“It was really good to be able to come to one place and have everything you could want under one roof”, Abda Hussain said.
“I’m very much into my fashion so to see all the new designs of the summer on the catwalk was fantastic”, she added.
Rifat Ali added: “I will definitely be coming back next year if the organisers decide to bring it back to Birmingham”.
The Asian Lifestyle Show will move to London’s Olympia from the 6-8 July.
Were you at the Asian Lifestyle Show 2007? What did you think of the show?
E-mail your thoughts to zakia@urbanmedialtd.com