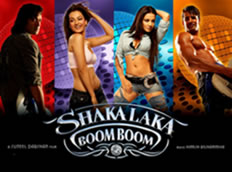 Shakalaka Boom Boom revolves around the wheeling and dealing of the Bollywood music industry
Director: Suneel Darshan
Cast: Bobby Deol, Upen Patel, Celina Jaitley, Kangna Ranaut and Sana Panscholi
The film takes a closer look at the conflicts, trauma and power possessed by many of the key personnel in the industry. AJ is a musical icon and Reggie an upcoming singer. Besides being suave, smart and successful, AJ is also an excellent businessman. And that’s where he gets his success from. His wife Seema and his media promoter, Sheena, are his close associates. Reggie on the other hand, is a gifted musical genius. He is brash, arrogant and rude by nature. But Reggie’s sex appeal and musical brilliance soon attracts the attention of Sheena. She decides to open doors of the musical world which he only dreamt of. As time goes by, Reggie not only threatens AJ’s position in the music industry but also falls for Ruhi, the same girl AJ loves. Reggie’s obsession for Ruhi swipes her off her feet.
When AJ comes to know about this, he is enraged. Wallowing in self pity, he decides to get his own back on Reggie by camouflaging his jealousy with friendship. As predicted, Reggie falls prey to his supposed ‘good nature’. Will Reggie realise AJ’s sinister schemes before it’s too late or will AJ pave his road to victory at the cost of Reggie’s destruction. An Easter weekend bonanza release in the UK cinemas, Shakalaka Boom Boom is destined to be one of the big blockbusters this year. Fans can look forward to seeing their favourite stars on screen once again in this Suneel Darshan movie. Bobby Deol and Upen Patel are seen to adorn a ‘new look’ for this film. Upen’s physique and acting skills in this melodrama is sure to attract the attention of film critics and movie moguls.
Releasing by Tip Top Entertainment in London, the film’s brilliant musical score is composed by Himesh Reshammiya.