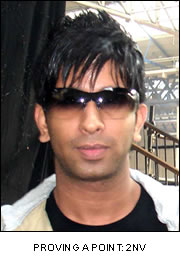 Birmingham music star 2NV has a point to prove. He burst onto the music scene in 2002 on Harbhajan Talwar’s critically acclaimed album ‘Soul Search’ with the tracks ‘Tappe 2NV’ and ‘Kiteh Chaleh’. Since then he’s been tipped as one of the industry’s most gifted young producers and living up to that reputation has led him on a journey resulting in the release of his debut album. Aptly titled ‘Point Proven’ the album showcases the varied and diverse musical style of the producer-come-singer. Released under his own label, ‘2NV Entertainment’, there are signs the star, who is known as Amaan to his family and friends, is trying to create more than just music. His label will help nurture other talent as well as give him the creative control other Asian music stars crave for. We caught up with 2NV to find out what led him to the entertainment industry…
We’ll start with the obvious question…why the name 2NV?

It’s funny because people always ask me that! If you break it down it’s a shorter version of saying ‘To Envy’. In other words I wanted people to envy my music.
What made you want to get into the music industry?

Well it’s a long story, but to cut it short I started of working for the singer HS Talwar, and I composed two songs for his solo album ‘Soul Search’. After producing for his album I decided to work on my own as I had loads of creative ideas.
How would you describe your style of music?

I believe it’s hard to find an album with nine tracks all sounding different from each other. That’s why I worked extra hard to make sure the style is not the same on every song. I have created various styles of music which I believe represent different parts of my personality so I developed a mixed bag for a worldwide audience
Tell us a bit about your debut album ‘Point Proven’.
The album contains nine tracks which range from Hip-Hop, R&B, Drum and Bass and includes Bhangra for the Desi lovers through to Hindi for the Bollywood lovers. There is also a Hindi track with a Spanish/Arabic feel to it. I would like to point out that it’s the quality of production that stands out.
Do you have a favourite track off the album?
I like the song ‘Saari Raat’, because it’s a track I can leave on continuously and just drift away to a different zone where I just think about everything in my life,
How do you think your fans will respond to the album?

So far I am getting an amazing response from my fans, because they appreciate that this album is very different from the rest. I have been overwhelmed by the amount of support I have received, 90% of it was positive. It’s a strange feeling when each time I get fan mail I do smile and I think back to all that hard work, those sleepless nights of stress and then I know it was a worthwhile effort. 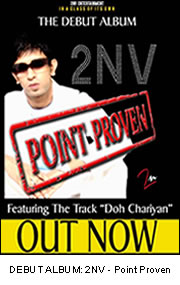 The album has been released under your own label. Is there an element of risk knowing ultimately the buck stops with you?

I believe there is always a risk in anything you decide to do on your own, you can only get out what you put in. We have put in 110% and we still do and the work will never stop. Releasing an album on my own label was the best choice for me for a number of reasons, mainly because it was I who had complete control of the recordings as well as release date, and anything else that was associated with the album. The ultimate decision was mine, and if things went wrong I knew it was me and only me who will take the blame.
Piracy is a big problem in the Asian music industry. What do you think of it and have you taken any steps to stop your album being a victim?

Well we have copyright protection on the album which means you can’t copy the disc. Tas my manager has also contacted various download sites direct to make sure our album is not on there. The way I see it is if someone is going to download your album they would not buy it anyway, there is only so much that you can do. People normally download songs only when there are one or two good tracks on the album, but I have made sure I did not have any fillers on the album so it would be value for money.
Are you planning on releasing the album in Pakistan and India? If so, what are your expectations?

We are flying off to Pakistan and India this month to arrange the release dates for the album. We are expecting a very big response from both countries because this is a crossover album that will appeal to fans on both sides. It has a little something for the Pakistani people, a little something for the Indian people. All in all its  a feel good album. I hope by releasing the album in India as well as Pakistan I can gain enough love and support by the fans enabling me to even come over and work with some artists over in both countries, I believe there are many talented people in the industry right now based in India and Pakistan.
Taking a quick look at your bio, your talents don’t stop in the music industry. What were the reasons behind funding your own production company in Karachi?
When I started with 2NV Entertainment, I had a bigger vision. I didn’t want to just be in the music industry, I wanted to cover entertainment as a whole from TV and film work across to directing and post production. By having your own production company it gives you more flexibility of what you want to do, so everything is controlled by you and you can take it in the direction you want.
Finally, what have you got planned for the rest of 2007?

We are currently in production for a music show abroad which will be shown on Sky TV. You may also hear our music on a major television soap that is on BBC1 soon as they requested “World TV Clearance” to play our music in some of their outside “markets” scenes. That was such a great feeling knowing it’s not just Asian people that have picked up on our music but other people who are also in the industry who are trying to help us along the way, it’s a good feeling! We will also be looking to produce our second album as well as work on Daler Masti’s Album. And finally in the Autumn we’ll look towards starting work on Shides’ aka ‘1stClass’ album.


Point Proven by 2NV is out now!