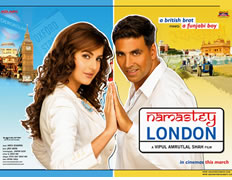 A romantic comedy dealing with the lives and loves of second generation Indians in the UK
Director: Vipul Amrutlal Shah
Cast: Akshay Kumar, Katrina Kaif, Upen Patel, Rishi Kapoor, Javed Sheikh
Small pockets of Asian communities are present all over the world but a large majority resides in the UK.
Over here, the elder generations have not forgotten their identities and their culture. But much to their dismay, this is not the case with the younger generation who are born in the UK.
This Bollywood film focuses on one such example – Jasmine (or Jazz) who is born and bred in London.
Jazz has already been through hoards of eligible suitors after being recommended by her father. But each time her dad tries to match make, she makes sure that she gets rid of them one way or the other.
That’s because Jazz is not interested in being tied down to a typical Indian man. She would rather marry an English guy whom she feels more in-tune with her way of thinking and lifestyle.
So this explains why she has taken a fancy to her boss Charlie Brown. Already gone through three divorce settlements, Charlie is now on the look out for the fourth Mrs. Brown.
Charlie also reciprocates his feelings towards Jazz and so one fine day he proposes to her. But before Jazz could answer, their tender moment of togetherness is interrupted by a phone call from her father, Manmohan.
Manmohan has an ingenious plan up his sleeves. He wants to take his family on a trip to India. This way he can help his family to be in touch with their roots and also keep a look out for a good husband for Jazz.
After a series of mishaps with possible suitors, Manmohan turns to his best friend Balwinder for help and advice.
And as luck would have it, Manmohan takes a liking to his friend’s son, AK and in no time gets Jazz married to him.
On reaching London, Jazz, finally speaks her mind in front of AK, revealing to him and her family, that she was forced into this marriage.
Ak is distraught news and even shocked to learn that she in love with her boss and has already agreed to his marriage proposal.
Torn between his logical instincts and blind love for his wife, AK decides to stay on in London until Jazz marries Charlie.
And so begins AK’s journey in a strange land amongst strange people in a quest to win over his wife ‘s love.
Whether AK can go against all odds and accomplish what he set out to achieve, forms the rest of the story in this romantic comedy.