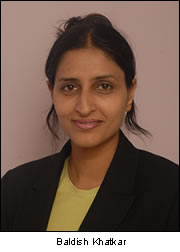 THE head of the family team at a Birmingham law firm says it is dealing with an increasing number of Asian couples whose marriages are failing.
Baldish Khatkar who heads up the family team at Young and Lee says that attitudes are changing especially with younger Asian couples who are now more willing than in the past to end a bad marriage.
“It seems that the revolution in social attitudes that came in the 1970s and 1980s is now showing itself in Asian and other minority ethnic communities,” said Baldish, who is dealing with an increasing case load in Young & Lee’s offices in Birmingham, Kingwindford in the Black Country and in Bromsgrove.
“In the past it was quite unusual for an Asian couple to divorce but this is changing. It is especially the case with young professionals who seem much less willing than their parents and grandparents to put up with an unhappy marriage. Attitudes are certainly changing and there is much less stigma about divorce than was once the case.
“As more Asian women are now working this is another factor as they have greater financial independence although the number of working women from this section of the community remains less than is the case of other ethnic groups.”
She added that arranged marriages amongst the Asian community are now quite unusual although arranged “introductions” that led to marriage with varying levels of pressure from the family are not uncommon.
Baldish said that Young & Lee is also finding the “seven year itch” as something of a myth and that an increasing number of professional couples are starting married life with a recognition that they may not end up living happily ever after.
“We see an increasing number of couples that have been married a short time – perhaps only a year or two – but have decided it is not going to work out. At the other end of the scale older couples that have in some cases been married 20 or 30 years are calling time on their relationship. This is down to a combination of changing attitudes and greater financial independence.
“I also believe that there is greater realism and although it may seem unromantic an increasing number of couples, especially professional people, are enquiring about prenuptial agreements before they tie the knot. Highly public relationship breakdowns like that of Paul and Heather McCartney have helped to focus minds although it would be wrong to believe that prenuptial agreements are only for the super rich.”