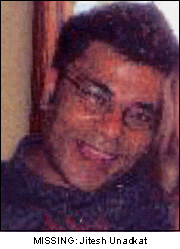 DETECTIVES in Leicester are appealing to the public for help in locating a man missing since November.
36-year-old Jitesh Unadkat, who lives in the Belgrave area, was last seen by friends a few days prior to him being reported missing on November 17 by a family member.
He was sighted in the Mill Lane area of Leicester on December 19, 2006 and appeared safe and well but his family and friends are concerned for his welfare, as he has not been in contact with them which they say is very unusual.
Jitesh is described as an Asian male, 36 years of age, 5’5″ tall and of slim build. He has brown eyes, a spotty complexion and black hair. He also wears contact lenses.
His family and the police are appealing for him to make contact to let them know he is safe and well. They are also appealing for anyone who recognises Mr Unadkat’s description or perhaps knows where he is to contact PC 1794 Sean Lockley at Belgrave local policing unit (0116) 222 2222 extension 5728.