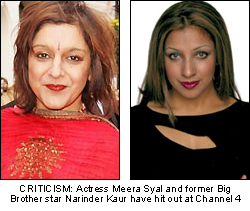 BRITISH Asians Meera Syal and former Big Brother contestant Narinder Kaur have led a wave of criticism against the treatment of Bollywood star Shilpa Shetty on Celebrity Big Brother.
More than 10,000 viewers have complained to TV watchdog Ofcom and Channel 4 after watching housemates Jade Goody, Danielle Lloyd and Jo O’Meara target the 31-year-old actress on a daily basis.
Shetty, who has now become second favourite to win the show behind fellow housemate Cleo Rocos, has been called a “dog” and accused of wanting to be “white” by the trio. In last nights show Goody’s boyfriend, Jack, is heard telling Shetty to pick out left-over chicken bone’s flushed down the toilet with her teeth.
But while an official statement by Channel 4 has said they are monitoring the situation closely, playwright and novelist Meera Syal has accused the broadcaster of putting viewing figures ahead of stepping in to end Shetty’s suffering.
Viewing figures for the show have averaged 4.5 million, up from 3.9 million last week, since the controversy erupted.
“There is a very thin line between what is entertainment and a vile spectacle and I think we are in that area now,” Syal told the BBC Asian Network.
“What this treatment of Shilpa has done is remind a lot of Asian people in Britain of the type of uncomfortable treatment they’ve received themselves over the years,” she added.
“This is bullying and we mustn’t forget the impressionable people who watch this show.”
“I have great admiration for the way Shilpa has handled herself. But Channel 4 has been obviously rubbing their hands at the audience figures because everybody is talking about it now,” she said.
Former Big Brother star Narinder Kaur also hit out at Channel 4 and Endemol, the makers of the programme, saying they were setting a bad example by allowing Shetty’s treatment to continue.
“Millions of youngsters watch Big Brother and Endemol should set an example – they shouldn’t tolerate the way Shilpa is being treated.”
“I wasn’t surprised when people failed to pronounce Shilpa’s name. When I was in the house six years ago they couldn’t say my name and just shortened it to Naz. But I am shocked at the level of ignorance that these girls have shown,” she said.
“To mock someone’s culture for being different from yours is racist, and it is disgusting to watch.”
Writing for The Guardian, Novelist Hari Kunzru said: “Jackiey’s refusal to learn her name was straightforwardly racist – every British Asian will have had that conversation at least once, complete with self-righteous complaints about the “difficulty” of the task. It was a very ugly piece of TV and I’m glad people have felt uncomfortable enough to complain.”
Labour MP Keith Vaz has tabled an early day motion in the House of Commons about Miss Shetty’s treatment.
‘We would not tolerate this kind of racism on other types of television programme and we should not do so on a programme that is watched by millions,’ he said.
Hertfordshire Police have also revealed they are investigating two e-mails sent to Channel 4 in which threats were made against specific housemates.
Although they did not confirm whether the e-mails were related to the controversy, they did confirm they had received a complaint about racist behaviour in the house.
Meanwhile Carphone Warehouse, sponsors of the show, have denied some reports suggesting they close to ending their sponsorship deal because of the controversy.
A spokesperson for the telecommunications company told BBC News Online they had
“full faith” in the broadcaster in dealing with allegations of racism.
Related Articles:
Celeb BB in massive ‘racism’ row
Bolly babe getting flirty in BB house!