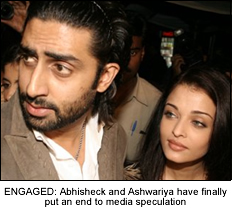 FOLLOWING months of speculation Bollywood superstars Aishwariya Rai and Abhisheck Bachchan have announced their engagement.
The couple, who have dogged persistent rumours about their relationship, confirmed to the media that they’re engagement had taken place at Rai’s home in Mumbai.
Although no official announcement has been made, some media reports have suggested the couple will tie the knot in a glamorous wedding in February.
Rumours of an impending nuptial surfaced in November after the duo were pictured visiting a Hindu temple.
But the couple refused to answer any questions about their relationship, thought to have started on the sets of Umrao Jaan in which both stars had lead roles in the re-make of the classic 1981 film starring former Bollywood golden girl Rekha.
Rai, who has in the past been linked to Salman Khan and Vivek Oberoi, is gearing up for the British release of her forthcoming film ‘Provoked’ in February.
Abhishek Bachchan was engaged to former actress Karisma Kapoor but the marriage was called off.