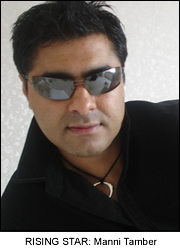 UK Bhangra artist Manni Tamber has for the most part of his career lent his mixing skills to other artists. Not one to shy away from a challenge, December saw the launch of his debut album ‘Seriously’, a sure fire sign if you needed one to know he was serious about his music. Good reaction to the album has meant Manni Tamber is slowly beginning to get noticed as an influential UK Bhangra artist.
We caught up with Manni to find out more about the album and his plans for 2007
Tell me a bit about your new album
I’ve worked on the album over the last couple of years in between normal family and career time so it was difficult to invest more than one day per week. It has a flava of ‘old school UK Bhangra band style as well as some present and future sounds. Because I am from the live band era the compositions are more to that style. It has artists such as Amar Arshi and Master Rakesh as well as some new artists and singers from the band era namely Parminder Rayet from Azaad.
What’s your favourite track on the album?
It’s difficult to pick any single tracks because I like them all as I have worked easily as hard on each one but if I have to name then equal favourites are as track listed on the album. Track 1 ‘Without You’ (A heavy club track), track 2 ‘Jat dang Chackle (good get down and boogie style!), track 4 ‘Naag Vaarga (a good one at weddings), and track 5  ‘Beja Beja’ (a real catchy dance track).
‘Seriously’ is your debut album. How do you think your fans will react to it?
It’s always difficult to predict but early indications are they all have at least two or three
favourites of their own from the album which means at least all the tracks are being appreciated by different people.
What type of feedback have you got on the album?
It’s all been positive and already I’m getting ideas for the next release. The music video had been delayed so everyone’s waiting for that. It should start getting air play in a couple of weeks onwards which I’m looking forward to
What are your plans for 2007?
It’s already looking like a packed out year! My DJ Roadshow is getting booked up and I’m working on a couple of new projects for face2face records for later this year. I also have to go to India for a project I have been asked to be part of. I am doing the rounds on the radio stations and the live stuff is on the cards which is already starting with ZEE carnival in February. I am also keen to work with new unsigned talent as I know how difficult it is for new artists to get onto the scene.
‘Seriously’ by Manni Tamber is out now