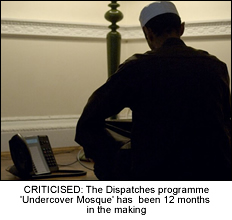 MUSLIM groups have slammed Channel 4’s Dispatches programme set to be broadcast this coming Monday accusing programme makers of heightened Islamaphobia.
Muslim Public Affairs Committee (MPAC) and UK Islamic Mission (UKIM) have spoken out against the programme ,’Dispatches: Undercover Mosque’ which looks set to reveal that Islamic extremists are still at large within a number of Mosques across the Midlands.
The broadcaster said the programme will reveal how “a message of hatred and segregation is being spread throughout the UK, inspired by Saudi Arabia – a country our government calls its principal ally in the Middle East”.
Following a 12-month undercover operation, the programme shows an undercover reporter joining worshippers at a number of Mosques across the Midlands.
During his investigation secret video footage captures sermons in which ‘Saudi-trained preachers proclaim the supremacy of Islam, preach hatred for non-Muslims and for Muslims who do not follow their extreme beliefs – and predict a coming jihad’, the broadcaster said.
An article in The Observer newspaper said the programme filmed Muslim preachers “exhorting followers to prepare for jihad, to hit girls for not wearing the Hijab, and to create a ‘state within a state’.”
The investigation also attempts to reveal how the influence of Saudi Arabian Islam, Wahabism, extends beyond the walls of some mosques to influential organisations that advise the British government on inter-community relations and prevention of terrorism.
One of these organisations is UK Islamic Mission who run a Birmingham Mosque in which a preacher is recorded as part of the investigation praising the Taliban.
The organisation, an independent British Muslim institution which was established by British Muslims in 1962, has strenuously denied promoting Islamic extremism.
In a 5-page letter to programme producer Andrew Smith, Shafiq ur-Rahman, President of UKIM, said the views of the preacher filmed praising the Taliban did “not reflect [their] policy or culture”.
“The hall is available for hiring by other community organisations and almost all the alleged ‘angry outbursts’ you cite seem to have happened during its use by some non-UKIM organisation”, Mr Rahman wrote in his letter.
“We know that the TV camera is often made to lie and we do not know the veracity or context of those seemingly rash and rhetorical utterances. But assuming that they were really made the way you say, I have no hesitation in saying that they did not reflect our policy or culture”.
He said that while British Muslims were working hard to integrate into British society and fully respected British values, they were not being given due credit.
“British Muslims are being constantly lectured about integration, about community cohesion and about respect from British values and they have no problem about any of these,” he said.
“They are working hard to integrate, seriously to cohere with all other communities and they do have the fullest respect for the values of the British nation.
“Unfortunately, the boot seems to lie on the other leg. They need as much respect as they are supposed to give to others. They are human too and do not claim any infallibility. “Anything and everything can be raised and discussed but by not hauling an entire community into the dock and acting as judge, jury and executioner. Not once but almost every now and then.”
Muslim organisation MPAC also slammed the programme saying it would have “damaging effects on community relations and cohesion”.
In calling for its members and web site users to write a letter of complaint to the broadcaster, MPAC wrote on its website: “Once again the media, on their eternal quest to forge a public consensus have taken the views and actions of a few individuals and pinned them under the banner of Islam.
“This is a most disturbing practice and could have dire repercussions for community relations.
“Many people who watch this documentary could be mislead to form an opinion that all mosques are a hot bed for fanatical activity. Painting such negative images of the mosque is a direct attack upon Muslims who frequent mosques regularly and many would never consider extreme views of any nature.”
It went onto to accuse the programme makers of “duplicity and double standards”.
“The BNP use pubs across the country to hold their meetings and promote their vile message. Are these pubs then to be seen as extremist institutions?” the website said.
“Many would view young British Muslims indoctrinated by Islamic fundamentalism, seeking an armed jihad as unacceptable and despicable, but young British Jews indoctrinated by Zionist ideology and then inspired to join the Israeli Defence Force to kill Palestinians are somehow acceptable.  This is duplicity. This is a double standard! It is for these reasons that MPACUK stands today and urges its readers to act on such prejudices and try to prevail in a just cause.”
Dispatches: Undercover Mosque will be broadcast on Channel 4 on Monday 15th January at 8pm