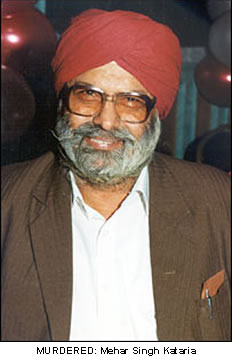 THE FAMILY of a 68-year-old man horrifically murdered earlier this year have released a heart felt appeal for any information on those responsible as detectives released new details about his murder.
Mehar Singh Kataria, a father of five, was savagely beaten and stabbed to death in February at his home in east London.
The retired tailor, who lived alone since the death of his wife eight years ago, was found by his son Harminder Kataria.
He had suffered massive blows to the head and was also stabbed several times, detectives revealed, following the fatal blows to his head.
An envelope containing £200 was also stolen from the address.
Ten months on from his murder detectives are still searching for his killers and have put up a £20,000 reward for any information leading to their conviction.
Mr Kataria’s youngest daughter, Rimpy Bhatia, (31), said her father’s death had torn the family apart.
“A father daughter relationship is always considered a special one”, she said.
“I know mine was with my father – ‘Daddy’s girl’. Well this Daddy’s girl received the shock of her life when she was told that her dad who loved her unconditionally was not only dead, but was murdered. Although I am married with children, my Daddy was still my tower of strength – so strong with such a warm heart. He led such a simple straightforward life.

“My strength was forcefully snatched away from me early this year. Ten months later the police are still trying to track down the murderer. It was broad daylight when he was killed in his own home; a happy loving home where he had seen his five children grow up, get married and where his 13 grandchildren visited.

“Now my family home has turned into a place where he was viciously assaulted. Why and whom is a question I ask myself every minute of the day. Why was he so brutally attacked resulting in murder? What could someone have possibly gained by taking the life of an old man?”
She appealed for any information on those responsible for her father’s murder saying, “I need closure, my life is on hold knowing his killer’s are out there, knowing they are still living and my Daddy isn’t. 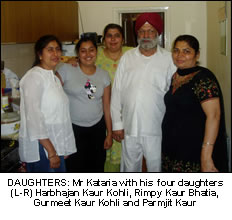 “They need to be punished and put behind bars where they cannot hurt someone else’s loved one. His killers left his home covered in his blood. Someone out there must know something, must have seen something.

“My Daddy was an honourable man – so well liked in his community.

“Please, if you have any information, tell the police.”

Detectives have revealed they are searching for two Asian men seen in the area before and on the day of Mr Kataria’s murder.
The pair were spotted at various times in the road where Mr Kataria lived and, on the day of his murder, they were seen standing in his front garden.
Detective Chief Inspector Carl Mehta, who is leading the inquiry, also revealed new details on Mr Kataria’s murder including his stabbing.
“He’d suffered several blows to the head with a heavy blunt instrument – I’m in no doubt that the person(s) who inflicted these injuries knew they were severe enough to have killed him”, he said.

“What happened next has puzzled my inquiry team. As Mr Kataria lay dead on the floor, the suspect(s) took a nearby tablecloth and placed it over Mr Kataria’s head down to his waist – through this cloth he was stabbed several times in the upper body, even though, I believe, the killer(s) knew Mr Kataria was already dead.

“At this stage I’m unclear for the motive behind this secondary attack; but what I do know is that it was unnecessary in causing Mr Kataria’s death and there must be another explanation to the murder(s) reasoning.”

He indicated Mr Kataria may have known his killers as he rarely allowed people he didn’t know into the property. There were no signs of a forced entry, Det Insp Mehta added.
“Mr Kataria was a security conscious man with inner and outer front doors; he would only open the doors to people he was comfortable with and who spoke his first language”, he said.
“There were no signs of forced entry at the house nor any further disturbance. I cannot exclude the possibility that he may have known his killer(s).

“Enquires have led me to believe that Mr Kataria’s killer(s) may well have been from the Asian community, possibly the Sikh community, where Mr Kataria was well known.

“I believe the answers to this brutal murder lie within the Sikh community and although my team have made hundreds of enquires to gather details, to date, little information has been forthcoming.

“I’m particularly seeking the assistance of the Sikh community to help solve this murder – I’m confident that if the police and community work together then significant steps can be made in an attempt to identify the perpetrator(s)”.
Anybody with any information is asked to contact the Incident Room on 020 8345 3734 or Crimestoppers 0800 555 111.