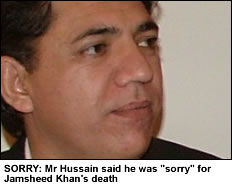 A LEEDS man freed from a death row sentence in Pakistan has spoken for the first time of his life behind bars.
Mirza Tahir Hussain flew back into the country earlier this month after his death sentence for killing taxi driver Jamsheed Khan in 1988 was commuted by President Musharraf.
Speaking to the BBC Asian Network, Mr Hussain revealed details of the fateful moments leading up to Mr Khan’s death as well as spending 18 years behind bars.
He told the station’s listeners about the moments leading up to Mr Khan’s death.
“Well I took out my wallet and gave it to him, simple as that, yeah. But he was not satisfied, you know”, he told presenter Sonia Deol.
“He ordered me to get out of the car, he’s not done with me and he’s going to, I mean molest me and I should go behind the bushes and follow his orders or otherwise he’ll shoot me.
“I didn’t want to move you know but he was pointing the gun at me and signalling me to move you know? So at a point when the gun was not aiming at me, I went for the gun and grabbed his wrists you know and in that ensuing scuffle the gun suddenly went off.”
He described Mr Khan’s shooting as an “awful incident” and was merely trying to “defend” himself.
Mr Hussain criticised the reaction of the Pakistani police when he reported the incident moments after Mr Khan’s shooting saying he was beaten to the ground.
He said: “When I saw the police I told them briefly what had happened and that the taxi driver needed help. The police rushed towards me and started beating me up.
“They kept beating me up until I fell to the ground. They should have listened to me and gone to the place of incident where the taxi driver was and taken him to hospital. If they had given him the proper hospital treatment right away he might have been saved.”
He also accused the police of trying to fix the case against him.
Since Mr Hussain’s conviction his family, led by brother Amjad Hussain, urged the British government to intervene in the case.
In October Prince Charles discussed the case with President Musharraf – an intervention some believe was pivotal in Mr Hussain’s release.
Mr Hussain said he was “humbled” by the Prince’s intervention but had hoped the British government had intervened much earlier in his case.
Speaking on his years he spent in prison, Mr Hussain said it was “terrifying and horrible” because of the “system, the regime and the beatings”.
He added he had to “live with the reality” that he could be hanged at any moment.
Confined to a 12ft by 9ft cell with eight others he told presenter Sonia Deol he witnessed close friends being taken to their deaths by guards.
“We [could] hear the guards and all the officials gathering for this purpose and when the inmate is made to stand on the trap door.
“When the trap door opens and we know that someone’s just been hanged.”
Speaking on the family of taxi driver Jamsheed Khan, he expressed his sympathy for his mother saying he was “sorry” for Mr Khan’s death.
“As a Muslim I mean, I cannot reverse all this, but I can understand how it feel”, he said.
“I’m sorry for her son’s death in such circumstances and in that way.”
He added he found it “difficult” facing his own family on his return to the UK.
“Because of our religion and culture, such incidents are seen as very shameful and horrible”, he said.
“We are brought up in such a way that we just cannot imagine harming or killing someone.
“It is very difficult for me to come to terms (with that) or face my family.”