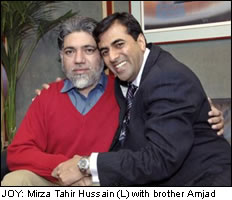 A BRITON who flew back into the UK after spending 18 years on death row in Pakistan has spoken of his relief at returning home.
Mirza Tahir Hussain was released by Pakistan authorities and flew back to the country hours after his death sentence was commuted.
The 36-year-old has spent most of his life with the prospect of being executed after he was found guilty of killing a taxi driver when he visited Pakistan with his family in 1989.
On his arrival at Heathrow airport, Mr Hussain thanked those who had campaigned for his release.
In a statement read on his behalf by MEP Sajjad Haider Karim, Mr Hussain said: “I am glad to be back home.
“I must thank all the countless thousands of people in the UK and elsewhere for my pardon and release.
“It has been a tremendous strain to be separated from my family and loved ones. I thank God for giving me the faith and strength to persevere.
“Freedom is a great gift. I want to use this freedom to get to know my family again, to adjust back to living here and to come to terms with my ordeal.”
His brother Amjad Hussain, who had campaigned tirelessly for his release, was visibly overjoyed at having his brother back.
But he told the BBC his brother would need counselling and medical tests before he returned home to his family in Leeds.
“It’s been quite an ordeal for him and he needs some space and time and needs to adjust”, he said,
“Still, it is a wondrous occasion for him.”
Sajjad Karim, Chair of the European Parliament Friends of Pakistan Group, who has also campaigned for Mr Hussain’s release said: “This is one of those occasions when it is extremely rewarding and satisfying to see the outcome of the efforts of so many people.
“I was delighted to be able to be there to welcome Mirza Tahir home and honoured to be asked by his family to read out a statement on his behalf. I was particularly impressed with the strength, courage and positive attitude that Mirza Tahir displayed despite the terrible ordeal he has had to endure.
“Despite everything he has gone through he has remained strong, showed no bitterness for having spent half of his life in prison and was in very good spirits when he arrived back on British soil for the fist time in 18 years.
“There are not many days in politics that are as rewarding as this one has been,” Sajjad concluded.