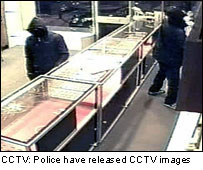 A £2,000 reward has been put up by the family of a jeweller stabbed and beaten with a hammer in his store.
Verinder Kumar Sedheva, 51, was attacked with a knife and hammer by two hooded men who burst into his shop in Smethwick last Wednesday.
He is still in hospital where his condition is described as serious.
Police released CCTV pictures in the hope the two offenders would be recognised.
His family appealed to anyone who knew the offenders to give them up to the police.
Mr Sedheva’s brother Parmjit told The Birmingham Mail: “This was a crime of violence carried out with extreme force and brutality.
“Without reason or provocation, my brother was stabbed – the men had got what they wanted.
“Those who know who these people are, do not join them in their crime by shielding them. I appeal to people to give the police the information they need to make an arrest.
“The jewellery that was stolen is Indian gold, which is not normally worn by the English or West Indian community. It would be unusual to see this type of jewellery on anyone but members of the Asian community.
“If jewellers have been offered this type of gold please ring the police.”
Anyone with any information is urged to contact police.