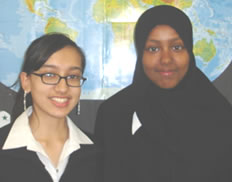 TWO LEICESTER students are in the running to edit a BBC radio current affairs programme.
Moat Community College Year 10 students Libin Ashkir and Zaina Sanjania are up against three other teams in a bid to edit ‘Today’, the BBC’s flagship current affairs radio programme, on New Years Day.
They were selected after sending in a proposal for the show with the help of teacher Claire Jackson, head of business studies and enterprise at the college.
A voting scheme has been set up to determine the successful team and the young Leicester duo are urging people to back them.
Claire Jackson said: “This has been a joint project, all three of us have put ideas forward. We all love the show. We are so pleased to have made it though to the short list, but we really want to edit the programme. We need people to vote for us. If you can’t vote online from home or work, then local libraries have web access. We really want the people of Leicester to vote for us, and then we can do them proud on Radio 4 on January 1st.”
If they win, the team from Leicester plans to highlight local successes like the excellent community relations in the city, alongside national and international issues. Including putting Rottweilers on the Dangerous Dogs Register, persuading motorists to cycle to work, good news about Israeli and Palestinian achievements, and trusting robots to perform surgery. They even want to include a spot about booting out business from football.
Cllr Roger Blackmore, leader of Leicester City Council added: “This is a tremendous achievement for the team from Moat Community Collage. I would ask everyone to take a few minutes to go online and vote for the Leicester team. It would be a marvellous way to start 2007, with Claire, Libin and Zaina editing one of the most prestigious news programmes in the world”.
Past guest editors for the show have included U2 frontman Bono and Stephen Hawking.
Voting is online at www.bbc.co.uk/radio4/today. The winner will be announced on Tuesday 14th November.
Today is broadcast on BBC Radio 4, Monday to Friday 6-9am and Saturday 7-9am.