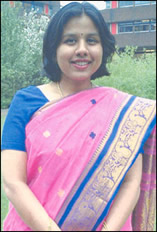 A MAN who planned and murdered his wife on the campus of a leading Midlands university has been jailed for life.
Anurag Johri bludgeoned his wife Deepti Anurag (pictured right) to death with a baseball bat in November last year at the University of Central England’s Perry Barr campus.
He later attempted to commit suicide but was found by police and rushed to hospital.
34-year-old Johri was found guilty of his wife’s murder at Birmingham Crown Court on Thursday.
Det Insp Derek Quinn, of West Midlands Police, said Johri’s conviction was a “victory for justice”
“Deepti Anurag was a vibrant and intelligent woman from India who arrived with her husband Anurag Johri in the UK in 2003”, he said.
“When this relationship deteriorated however, Johri murdered her by bludgeoning her to death.
“Yesterday’s conviction and today’s sentence is a victory for justice.
“I would like to personally thank staff at UCE for their support who helped their colleagues at West Midlands Police.”
Sentencing Johri, Judge Mr Justice Gray told him: “Your attack on her using a baseball bat as a weapon was prolonged and ferocious.
“You struck her on at least four occasions, fracturing her skull in three different places.”
“I have no doubt that the attack was carefully planned and premeditated.”
Anurag Johri, a PhD student at the University of Central England (UCE), had confided to other members of staff about problems she was having with her estranged husband, Birmingham Crown Court was told.
Gareth Walters, prosecuting, told the court Johri bludgeoned his wife to death because he could not accept that she had become financially independent and had left him.
Johri had pre-planned the murder after buying a baseball bat a day before the murder. He had also, the court heard, logged onto Google to try and search for tips on killing with a baseball bat and not getting caught.
Mr Walters told the court that on the day of the murder Johri visited his wife at the business school on UCE campus where she worked.


He hid a recording device before returning with a bag of presents and the baseball bat.

He waited until she was alone before entering the room she was in with the bag of presents. After a short conversation between them he left, only to return later with the baseball bat which he had hid in a room opposite.
“In short he beat his wife with the baseball bat over the head from which she died,” said Mr Walters.
CCTV cameras had captured Johri in the moments leading up to the murder while the recording device left by the defendant had recorded sounds including Mrs Anurag’s screams.
Johri had dragged his wife’s body under a desk before fleeing and eventually attempting to commit suicide that night.
Mr Walters continued: “The prosecution case in short is that when his wife left him and then became more and more independent of him he could not stand it.
He described Johri as the “domineering partner” in the relationship, adding, “this was a man prepared. He had planned all this. This was a man who knew precisely what he was doing, who was in control of his actions. There was premeditation behind this killing.”
Johri was told he will serve a minimum of 13 years before being deported.