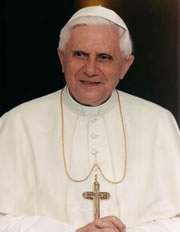 British Muslims have urged Pope Benedict to retract “anti-Islamic” remarks he made at a German university.
The Muslim Council of Britain led nationwide calls for the Vatican to issue an apology after the Pope (pictured right) quoted a 14th Century Christian emperor who said Muhammad had brought the world only “evil and inhuman” things.
As news of the comments spread across the Muslim world, the Vatican released a statement saying the Pope had not intended to offend. But it failed to quell the growing anger as many Muslims took to the streets in protest in India, Egypt and Pakistan.
In his speech at Regensburg University, the Pope quoted Emperor Manuel II Paleologos of the Byzantine Empire in a speech about the differences between Islam and Christianity.
The emperor’s words were, he said: “Show me just what Muhammad brought that was new and there you will find things only evil and inhuman, such as his command to spread by the sword the faith he preached.” The Vatican quickly released a statement saying said the Pope had not intended to offend Muslims.
“It is clear that the Holy Father’s intention is to cultivate a position of respect and dialogue towards other religions and cultures, and that clearly includes Islam,” said chief Vatican spokesman Federico Lombardi.
But the words of the Vatican have done little to ease criticism off the Pope who returned to Rome to face a barrage of criticism.
Dr Muhammad Abdul Bari, Secretary-General of the Muslim Council of Britain, joined in worldwide condemnation saying the Pope’s views on Islam were “ill-informed” and “bigoted”
“The Byzantine emperor’s views about Islam were ill-informed and frankly bigoted”, he said.
“One would expect a religious leader such as the Pope to act and speak with responsibility and repudiate the Byzantine

emperor’s views in the interests of truth and harmonious relations between the followers of Islam and Catholicism.

“Regrettably, the Pope did not do so and this has understandably caused a lot of dismay and hurt throughout the Muslim world. We would hope that the Pope will clarify his remarks without delay,” Dr Bari, added.
Britain’s Ramadhan Foundation, a youth organisation based in Rochdale, reacted angrily to the comments, comparing the Pope unfavourably to his predecessor John Paul II.
In a statement it said: “If the Pope wanted to attack Islam and Prophet Muhammad teachings he could have been brave enough to say it personally without quoting a 14th century Byzantine Christian emperor.
“The late Pope John Paul II spent over 25 years to build bridges and links with the Muslim community. He showed the world that its perception of Islam was false and that we are peace-loving people.”
In other parts of the world, Pakistan’s parliament condemned the “derogatory” remarks and demanded an apology. Muslims protested in the streets while security forces turned out to guard Roman Catholic churches.
In India, protestors burnt effigies of the Pope, and in Turkey, where the Pope is due to visit later this year, Muslims waved placards condemning the comments.