Home Interviews Asian on a Plane! 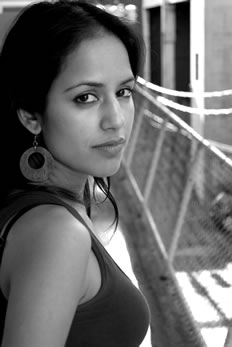 SHE MAY not have been cast in a lead role, but a Birmingham-born actress is making the Midlands proud as she battles with deadly snakes in the Hollywood blockbuster ‘Snakes on a Plane’. Asian Agam Darshi, who was born in Birmingham, currently stars in the box office hit ‘Snakes on a Plane’ opposite Hollywood star Samuel L Jackson.
The Asian Today caught up with the actress to bring you this exclusive interview.
You’re currently starring in the Hollywood blockbuster ‘Snakes on a Plane’, how did this come about?
I auditioned for the role like everyone else. Vancouver is called the ‘Hollywood north’, so Soap was being filmed here and cast a huge number of Canadians.
How does working on this film compare to your other projects?
SOAP was a big budget, and it was a lot of fun to do. They used CGI snakes and real ones. I’ve worked on other big budget films like Final Destination 3 and Deck the Halls. But a lot of Canadian film and TV shows tend to be quite low budget. It’s just a different atmosphere. I really enjoy doing low budget independents or shows, because sometimes there is more heart in it. People may not be getting paid a whole lot but they believe in the project.
You play the ‘iPod girl’, how does it feel playing a part with no name(!)?
Well my character has been given a name, as you’ll see on imdb. Its: Jennifer Branalin. But you’re right when I was first given the character, although I was excited to work with snakes, and be in this film, I didn’t put much weight on it. But since the movie came out, and since my image has been used on the trailer, it’s amazing the response I’ve gotten. People really responded to the movie, and I’m thankful to be a part of it.
I think it just goes to show that these ‘bit’ parts are just as important and as valid as the leads, in the sense that they help tell the story. And as actors we all have to pay our dues. Its humbling to play the part of the ‘secretary’ or ‘nurse’, and it prepares you for the larger roles when that time comes.
How do you feel the film will have an affect on your career?
Well like I said it’s given me exposure and people have responded to me and the film. A tshirt company down in the States even made a tshirt based on my character of ‘Ipod girl’!
Ultimately though, it’s another step in my career to get to where I want to go.
Were there any live snakes on the set? Did you come into contact with any, if so, how did that make you feel?
Yes! I did a death scene, that was unfortunately cut out of the film. They did the shot three times and placed a large yellow snake in the seat in front of me. It was about 4 feet long and the width of my arm. Every time the snake slithered on to my lap and around my back. I’m not afraid of snakes but its really unnerving having them on you!

What was it like working with the great Samuel L Jackson?
I don’t have any scenes with Samuel, but I did meet him and he was great. I had friends who were on set for most of the shoot and they have nothing but good things to say about him.
You also appear in the movie trailer, were you excited to feature in the trailer?
Yeah it was great. My mom was watching Access Hollywood, and saw it and phoned me. I was pretty excited.
The film aside, tell us a bit about yourself
Well I was born in Birmingham, and raised in Canada. I’ve always been really artistic. Whether its visual arts, acting, music, dance I love to do it. But ever since I was a little girl I always wanted to be an actress, so its wild that I’m actually pursuing my dream and getting somewhere with it.
When I’m not acting though, I’m writing screenplays, or playing guitar or just hanging out with friends and family. I also love to travel.
You were born in Birmingham, do you have any plans to return to the UK and pursue an acting career here?
Definitely. I have British citizenship, and I don’t plan on wasting it. Currently, North America is treating me really well, but I want to get to a point where I’m working internationally. I would love to work in Europe, because the style there is so different than here. And a lot of the filmmakers I respect are European.
You’re an actor, writer and producer. Which out of the three do you prefer?
I’m an actor at heart. That’s what I really love, and I’m really comfortable doing it. I trust myself and my skills. I’m training myself to love writing, but it’s still a bit of a struggle right now. It’s something I fight with. And producing is more of a necessity than anything. I think it’s important as an actor to create your own work, to feel like you have a voice and you’re not just waiting by your phone for your agent to call you. So being a producer is a part of that process. It’s great to be in charge of the vision, but it’s not very creative.
What’s next for you? Are there any forthcoming projects we can look out for?
I’m working on this great project called Under the Sycamore Tree. Its written by a Vancouver based actor/writer named Chris Shields. It’s about a football player who goes back to his home town, when his life is turned upside-down. I play Allison Parker, a third grade teacher who falls in love with him.
I’m really excited about this film and think its going to do great.
I can also be seen in Deck the Halls with Danny DaVito, and Good Luck Chuck with Jessica Alba. And currently I’m writing a feature script.
Interview by Zakia Yousaf