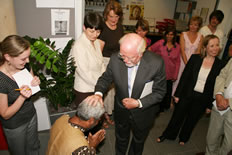 WHEN Dipak Joshi bent upon his knees and paid homage to Lord Attenborough at the University of Leicester- it was a dream come true.
For the former teaboy on the sets of Gandhi was able to renew acquaintance with the movie mogul he had so longed to meet-almost 25 years on.
The diversity development adviser at Leicester’s Haymarket Theatre was overwhelmed with joy at not only being able to meet Lord Attenborough, but his brother David as well.
Dipak, who spent two months with the Gandhi film unit when he was 22-years-old, said he was honoured to meet Lord Attenborough.
“It was a wonderful moment meeting Lord Attenborough again at the University of Leicester. He is a larger than life figure and he remembered people on the catering team during the filming of Gandhi. That was simply amazing”, Dipak said.
“I spent two months attached to the Gandhi film unit- I travelled across the country supplying soft drinks and tea to the unit members. 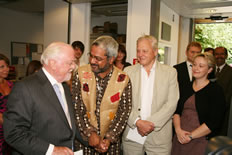