Home News Hundreds turn out in memory of Ricky Bhalla 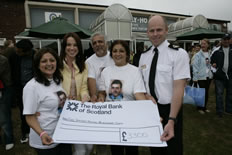 A FUNDRAISING fun day in memory of a Midlands firefighter who died in 2003 from a brain tumour has raised over £7,000.
Ricky Bhalla, from Stirchley, Birmingham, died in July 2003. The event at the Tally Ho Police Training Centre, was supported by his family and West Midlands firefighters and raised funds for Cancer Research UK and the Firefighters National Benevolent Fund.
Firefighter Bhalla was dedicated to working in the community and pioneered a number of fire safety projects. Just two months before his untimely death he received a Community Fire Safety Award for his work at Hay Mills Community Fire Safety Centre.
A fundraising day in memory of Firefighter Bhalla held in July 2004 raised just under £7,000.